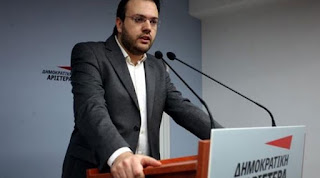 The president of the Democratic Left and the parliamentary spokesman of the Democratic Î£Ï…Î¼Ï€Î±ÏÎ¬Ï„Î±Î¾Î·Ï‚ Thanasis Î˜ÎµÎ¿Ï‡Î±ÏÏŒÏ€Î¿Ï…Î»Î¿Ï‚, spoke to R/P SKAI 100,3 and reporters Takis Hatzis and Nikos Panagiotopoulos.
For the course of the Democratic Î£Ï…Î¼Ï€Î±ÏÎ¬Ï„Î±Î¾Î·Ï‚
All the forces that we have set up the Democratic Coalition and the other forces and movements that urge you to come with us this time, we must proceed directly not the decisive step, but the decisive leap for a large array of social-democracy. After the developments in the SOUTHWEST, the pole of the strong social democracy, as in every european country away from ideological rigidities and obsessions that people have in spaces like the space of the radical left, in order to set up a strong, powerful pole of social-democracy and that we have to do it even more quickly for this and move on based on our design for a programming conference in the spring. I agree that we want a political position and for this we shall proceed to the programming conference.
The Democratic Coalition is the vehicle of a powerful social Democratic party in our country, which will really look non-privileged but not only them, I noticed there is a development process through a welfare state and, of course, away from policies of statism.
Because you ask them to tell you that in the space of our own, no one’s arms to the chair. When we did the Democratic Coalition no one expected that it would be a coalition of parties entitled Democratic Coalition PASOK-DIMAR and we will be able PASOK-DIMAR and Citizens ‘ Movements to move forward in this process. In the same way we have to move quickly.
For the change in leadership in the SOUTHWEST
We are interested in having a serious official opposition, because for a long time we didn’t have. The better the developments in each political space so improve everyone. Wait to see how you balance mr Mitsotakis and I want to see what ideas will dominate the party of the views of liberalism, or the views of the people’s right to you?
The reconstruction of the space of the centre-right’s own case, it’s not about us in the Democratic Coalition that we are building the pole of social-democracy, will not let their ideological and political differences in this process. This does not, of course, has nothing to do with the process of understanding is required. We are far away from policies exercised by the GREEK and sometimes reflect ideological obsessions or rigidities, such as by political deregulation of the SOUTHWEST. We will all be judged by our policies. In insurance, the government, for example, had first to inform the opposition and not ex-post to inform us about the proposal submitted to the partners.