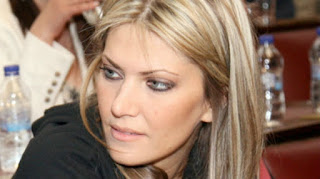 Read the announcement: “not under the capital controls of the… funds that are returned to the Greek banking system, he asked a question with a question of Mario Draghi the head of the Olive tree, Eve ÎšÎ±ÏŠÎ»Î®.
The mep underlined the terrible burdens inflicted on the real economy of the audits of funds as well as how those controls work as a disincentive for the return of funds that have been transferred from Greek banks abroad. This situation slows down the normal operation of the system of financing and payments for citizens and businesses, especially small and medium-sized, thus inhibiting any dynamic for recovery..
A fixed adjustment programme and the recapitalisation of banks are necessary conditions for the restart of the financial system, but not sufficient. It is necessary to increase the available capital base funding, and this to happen must directly repatriated funds.
On the basis of the purpose of the Eva ÎšÎ±ÏŠÎ»Î® asked the opinion of the ECB as to whether it could accelerate a process of repatriation of funds if given the incentive of an exemption from the existing restrictions of capital controls, but if I expressed the ECB’s objections as to this.
A follow-up question to the Mep:
The imposition of controls on capital has caused a huge burden on the functioning of the market, the liquidity of the business, the speed of cross-border payments and imports. In addition, there are large consequences for the banks themselves which are subjected to exceptional pressure in recent years from the massive withdrawals and transfers of cash to foreign banks.
The controls of capital work-retardants in the quantity and the movement of money in the real economy. In addition, they reproduce powerful disincentives to repatriation of capital, something that reproduces the vicious circle that maintains the banks with low financial opportunities of the real economy, despite the fact that it has completed the recapitalization and Greece is in a fixed and agreed programme of fiscal adjustment.
It is therefore important to Î¿Ï…Î´ÎµÏ„ÎµÏÎ¿Ï€Î¿Î¹Î·Î¸Î¿ÏÎ½ disincentives repatriation of lost overseas funds, which could be facilitated with exemption from the restrictions of the capital controls, for those who repatriate or deposit new funds to the Greek banks.
The President of the European Central Bank will:
Does the ECB that a policy of incentives for return of lost capital in the Greek banks can be implemented by exempting them from local restrictions of the capital controls?
Such a decision on behalf of the Greek banking authority would raise objections on the part of the ECB?”