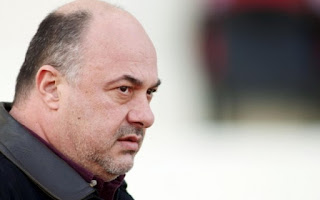 The mayor of Volos and former football player, Achilles ÎœÏ€Î­Î¿Ï‚…
he spoke to Î£Ï€Î¿ÏFm 94,6 and on the show “Appeal of the Third” with Kyriakos Thomaidis, for:
-the impending decision, which will be suspended from the office of the mayor of Volos: “The title of mayor remains until you die. I have forfeited even the office. You, mr. Thomaidis and your other friends, wait for it to fall. Wait, a little patience and keep a little basket. There is something very strange. How can there be restrictive conditions, and to be a flight risk, when I’m mayor?”.
-the decision of the ESAS, which ÎºÎ±Î¸Î±ÏÎ¿Î³ÏÎ¬Ï†Ï„Î·ÎºÎµ and on the basis of which Vangelis Marinakis to resign from the presidency of the Olympic within a month:
“I will not make any comment about mr Marinakis. Neither negative, nor positive. Not allowed for a person, we were friends for a number of years. It’s not going to talk with mr. Marinakis, no good morning, not going to tell you again. When there are four witness statements that the match Olympiacos-Veria was a setup, he’s not moving sheet. At the same time Olympiacos Volos disappeared from the football map, there is no testimony. For what justice are we talking about? Work with two measures and two weights”.
-complaints against the prosecutors Î¤Î¶Î¹Î¼Ï€Î»Î¬ÎºÎ· and Î Î¿ÏÎ»Î¹Î¿Ï… according to Interpol:
“I don’t care what it says in the newsletter of the Interpol. I never said that he has bribed someone, without having to be in front. How can I tell you something. I have deposited things that I know myself. I know that mr Î¤Î¶Î¹Î¼Ï€Î»Î¬ÎºÎ·Ï‚ is sick Olympiakos piraeus and from there to justice, if the exemption ruling for mr. Marinakis was fair. What I said to Justice, you can learn it and I’m sure you can learn it. I will not be a tout in the 57. Let me defend myself in a fair way.
He acquitted mr Marinakis, who welcome him acquitted, he had to acquit you and me. I in tape recorded conversations, I have been talking with mr. Marinakis and with another. How can I be a defendant and not mr Marinakis is? In Italy how to there are scandals of match-fixing by players and there isn’t a witness? To say the pundits… I want April 2016 to get a fair trial, without external interference, and righteous, irreproachable judges”.
-if she’s in the locker room of the Î Î±Î½Î±Î¹Î³Î¹Î¬Î»ÎµÎ¹Î¿Ï… in this year’s game with Olympiacos Volos: “I Never went in the locker room. You can ask whoever you want. There are Police in the locker room just for this reason. I’m with football, I’m passionate, but from 2011, I’m not going to the locker room, because I was banned from and I uphold the laws”.