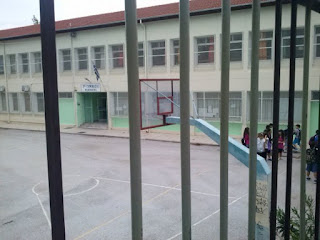 Read the announcement: “With surprise we have learned that the City Council of our Municipality on the 18 November meeting decided by a majority vote in the form of urgency, to proceed with the declassification of land from the school roof.
In particular it was accepted by a majority the proposal of the theme for “the amendment of the urban plan on the The.T-8 section 02 for the location of the Holy Temple”.
The site relates to a plot of 6.402 m2, under the ring road within the administrative boundaries of the Municipal Community of the municipality of Evosmos with the Freedom Kordelio, just above the substation of PPC. The issue, unfortunately, comes for the second time after the first (2013) had been forced to intervene in a cancellation fee of the Decentralised Administration.
The negative and incomprehensible above development occurs in a Municipality that is facing a serious, nationwide, problems of school housing. However, the most important is that it concerns an area of the Municipality in which the density of the student’s potential is so great that it created problems intolerable pressure on schools. It is characteristic that at a distance of 100 meters from this plot is situated in the complex of the Primary School 4th, 15th, 22nd, which is suffocating with about 1,000 students and convert gyms into classrooms. At a distance of about 400 meters is located the school complex, which also hosts the vocational senior high school of Eleftherio Kordelio with the 1st LYCEUM and the 1st high School of Eleftherio Kordelio. It is recalled that the EPAL that precisely because of the problem of school housing is in danger of closing and to be transferred out of the Municipality. Recently, to the Municipality in response to a sent in the House stated inability to find a sufficient space for the solution. Very close is also the 4th Primary school of Eleftherio Kordelio, in which, from the beginning of the year has been converted into a classroom inventory of materials fitness equipment, precisely because of the large number of students. And this condition exists when the administration of the Municipality in any discussion about the problem of school housing admits that in all of the Eleftherios Kordelio, there is no longer any free land for schools.
So, it is a wonder how the City Council decides by a majority that the declassification.
For all the above reasons, the Union asks us:
Â· The withdrawal of the 506/2015 decision of the Municipal Council so that the particular plot of land has the sole purpose of the erection of a school building in all the square that is labeled as a school unit.
Â· The removal â€“ or lowering the pillar of the PPC that is within the plot that is located on the border of the municipality of Evosmos with the Freedom Kordelio.
Â· The taking of all necessary actions for the immediate erection of a new school in order to give the solution to the chronic problem of school housing in the area as is the subject of the vocational senior high school of Eleftherio Kordelio.
UNION PARENTS ÎšÎŸÎ¡Î”Î•Î›Î™ÎŸÎ¥-Î•Î¥ÎŸÎ£ÎœÎŸÎ¥
For the
Board
The President
Angelic Î–Î±Î½Î½Î¯ÎºÎ¿Ï…
The Yen. Secretary
John Î¡ÎµÏ„Î¶Î­Ï€Î·Ï‚”