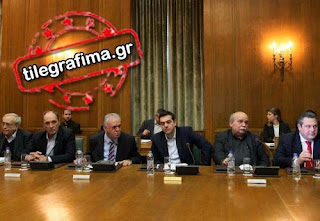 Yiannis Papadimitriou
Designs communication “escape” from the grim reality that shape the painful fiscal measures that have been adopted…
the last time, with electoral law, change the Constitution and reform for the government.
The staff of the Palace, Maximus is aware that the increase in the VAT all the essentials, the reduction of the tax-exempt and the introduction of “Ï‡Î±ÏÎ±Ï„ÏƒÎ¹ÏŽÎ½” in that it moves exacerbates the fatigue of society, and enhances the intense discomfort of the citizens who they see are aborted survive in the wild hopes that had been formed by the government of the Left with a touch ÎµÎ¸Î½Î¹ÎºÎ¿Î»Î±ÏŠÎºÎ® right.
At the same time, recognizes that the sale of all the Public Property with the inception of the assignment of the Greek, the PPA, etc. hits directly at the core of fanatical of fans. Under these grim data, the close associates of the prime minister are looking for ways to have fun impressions creating superficial communication dilemmas or fantastic narratives like the success story of the previous government of new democracy and PASOK.
This plan is part of the recent initiative of the government to open issue of changing the electoral law and revising the Constitution. However, in this case “starred” the sloppiness of the government. In particular, mrs. Olga Î“ÎµÏÎ¿Î²Î±ÏƒÎ¯Î»Î· left open the possibility of a referendum on the upcoming changes to the Constitution something that impinges directly on the article 110 of the… Constitution! As we pointed out, and the opposition, change of the Constitution in a referendum, attempted only the junta of the colonels.
However, among the changes promoted:
– the abolition of the problematic law on liability of ministers that lead to the pardoning policies of persons with limitation of criminal offences
– the establishment of a specific time limit for parliamentary office. Maybe up to two terms
– for there to be incompatibility between as and cabinet office
– to be given increased powers to the President of the Republic and is elected directly by the people.
Also, the government is considering the change to the electoral law within the next quarter. In accordance with information the next time you will launch a consultation with the other parties on all crucial issues such as the system of proportional representation, the abolition of the bonus of 50 seats, the “breaking” of large constituencies etc. which is expected to be completed at the end of the ÎºÎ±Î»Î¿ÎºÎ±Î¹ÏÎ¿Ï so then the proposals can take the form of a bill that will be tabled in Parliament.
In-depth Î±Î½Î±ÏƒÏ‡Î·Î¼Î±Ï„Î¹Î¼ÏŒÏ‚
In addition, the agenda of the Megaron Maximos, there’s the question of the reformation, although the prevailing scenario indicates that the change in government composition will come next autumn before the start of the negotiations for the second cycle of evaluation. It is recalled that the next winter is expected just as heavy with the previous measures for the working such as the liberalisation of dismissals. In any case the names and crashes as they are formed today, they want mr Nikos Pappas to assume the critical position of the ministry of Development.
Also, the information indicate that mr. Panagiotis ÎšÎ¿Ï…ÏÎ¿Ï…Î¼Ï€Î»Î®Ï‚ will be moved from the Interior ministry to return to the ministry of Health as the prime minister is not pleased by the arrhythmias of the duo Blonde â€“ Î Î¿Î»Î¬ÎºÎ·. Sources indicate that the government will join, and mr. Fotis Kouvelis, assuming the vice-presidency or the ministry of Justice.
Steadfast is considered to be mr. Euclid Î¤ÏƒÎ±ÎºÎ±Î»ÏŽÏ„Î¿Ï‚ although some “see” takes the place of the lady Luka Katseli. Some estimate that mr. Panos Kammenos will be moved from the ministry of Defence in Foreign affairs.
Source