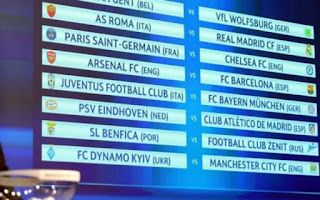 It’s a phrase a clichÃ©, but it reflects the reality. “No one is qualified or disqualified from the draw… Inside the stadium it turns out if a draw is good or bad for a team”, used to say the coaches and they’re probably right. Sure, but, after each draw is a big word â€“ not just “ÎºÎ±Ï†ÎµÎ½ÎµÎ¹Î±ÎºÎ¿Ï” level â€“ about how lucky or unlucky was the the group. Either because it has avoided a hard journey or a behemoth, or the exact opposite.
As it happens every time, this year, in the draw of 16 the goddess of luck had a good mood, making pairs of three different categories. In the first category are those who could the teams to meet even in the final (Arsenal-Barcelona, psg-Chelsea, Juventus-Bayern), in the second are couples with a clear favorite (Roma-Real Madrid, Eindhoven-Atletico Madrid, Dynamo Kiev-Manchester City) and in the third category of the less commercial (Benfica-Zenit, Ghent-Wolfsburg).
Which groups, however, smiled after the result of the draw and what people were expecting something better? The FourFourTwo the gazzetta.gr presents them â€“ theoretically – winners and losers of the process.
Winners
Ghent
For the first time in its history participated in the groups of Champions League and made it through to the last 16. There, it was perhaps the most weak â€“ on paper â€“ team of the tournament, while the second had potential rivals teams like Barcelona, Real, Bayern, Chelsea, Atletico and City. But Ghent was drawn with Wolfsburg. If that’s not luck, then what’s it called?
Manchester City
Every year, searches for transcendence in the Champions League, but he never does. The reason is because she never was able to finish in first place of the group, in order to have a more favourable draw then. Both times (last year and the year before that) which made it to the 16, had gone as a second and fell over in Barcelona. This year, he managed for the first time to qualify as the first, and the luck smiled at her in the draw, having drawn with Dynamo Kiev.
Atletico Madrid
Dreaming again of days from two years ago season, where he won the championship and reached the final of the Champions League. At 16 he went as the first, but in the possible rivals were teams like Juventus, psg, Arsenal and Roma. It may not fell in the theoretically weaker Gent and Dynamo Kyiv, but the Eindhoven each other than can be of concern to the group of Î£Î¹Î¼ÎµÏŒÎ½Îµ, who probably is smiling after the draw.
Losers
Chelsea
Of the eight “weak” groups of the draw, she didn’t want anyone to rival it was the psg (in my opinion more than Juventus or Arsenal). In this fell the clergy were the Chelsea, which at this time doesn’t scare anyone. Barely the opposite. It will be presented in February, no one knows, but now the psg is the favorite in this pair. The “blue” they made a great effort to finish in first place of their group, in order to have a better draw, but Mourinho fell over on Zlatan and his company. If until then there is still Mourinho, of course…
Italian teams
Roma and Juventus are the representatives of Italy in the round of 16, but after the draw, their future is uncertain in the event. Simply because there are three teams in all of Europe that nobody wants to play with them. Barcelona, Real and Bayern. And the “Italian women” have fallen on two of the three. The Roma faced fc Barcelona in the groups and now you will fight against Real madrid, while Juventus will find in the way of the Bayern. This is what happens if you finish second, there’s a chance to play with these teams then. And if the “Ï„Î¶Î¹Î±Î»Î¿ÏÏŒÏƒÎ¹” they had no chance for the lead in the group with the Catalans, the ‘Great Lady’ killed himself and now he’s in front of a bavarian… mountain.