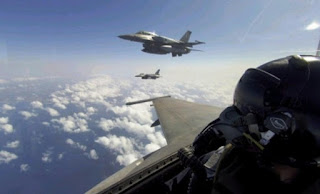 Violations of FIR Athens and in a series of violations of national airspace… went 11 Turkish aircraft on Monday, in northeastern, central and southeastern Aegean sea.
In particular, the 11 aircraft made 17 violations, and 11 violations.
None of the aircraft were not armed, while there were no jams.
All the aircraft have been identified in accordance with the international rules, according to established practice.Source