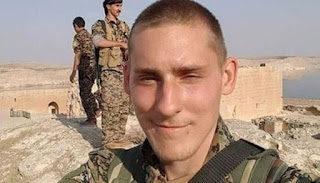 A British…
he was fighting in Syria, “he turned the gun on himself” in order to avoid capture by the Islamic State, said Kurdish sources on the BBC.
This is Ryan Locke, a 20-year-old, from Chichester, West Sussex, who died on 21 December during a battle for the capital the ISIL ar raqqah.
He fought as a volunteer with the marxist forces of the Kurds of the YPG.
The YPG said on the BBC that “the sign of the shooting was found under the chin,” referring to suicide.
The same sources said that 5 fighters of the YPG were ambushed by the jihadists in the village of Jia-a Bar and have shown a remarkable resistance before they were killed.
After the bodies were found, the tests showed that “it appears the British fighter killed herself to avoid capture by the ISIL”
Locke was a chef and travelled to Syria in August, having told his friends that goes on vacation in Turkey
His parents have thanked the YPG brought their son home. This is the trio of British dying fighting side by side with the marxists of the YPG against the Islamic State.