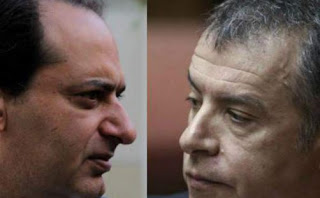 In war, communications with both sides attacks on transparency, interlacing, and… ÏÎ¿Ï…ÏƒÏ†ÎµÏ„Î¹ÏŽÎ½ have indulged in the last 24 hours the River and the minister for Transport Ch. Spirtzis on the occasion of the National E-Procurement System.
The River in a later announcement stresses that the question of the society to mr Î£Ï€Î¯ÏÏ„Î¶Î· is a: fifteen years (2000 – 2015) that had a central role to the TEE, like a warm strain of PASOK, what a blatant waste of he fight back? And adds:In which contractors said no? With what strong has crashed into it? What are the assignments disagreed with? What a feast revealed to you? What favors refused? His companions are waiting with great interest to his response.
In the same communication it is highlighted that the National System of Electronic Public Procurement (E.P.The.In PARTICULAR.P.) that when the Minister has not been completed, “already has functions relating to the preparation and publication of the declaration of a tender, the submission of tenders by prospective contractors, evaluation and award of the contract”, as referred to in the official website of the Ministry of Finance.
In the operation of the system have already trained civil servants of bodies of the public and executives of private companies â€“ suppliers of the state, only that mr. Spirtzis chooses to ignore it. Specifically, in November 2015 was registered 17.026 users in the system. Overall, the month this was posted in the system 3.789 notices, 20.661 contracts and 52.242 payment orders.
Finally, the River, states that “if the Minister continues to need training services, our executives will be Monday at the Ministry. Please only arrange for the administration of the required passwords on the system.”