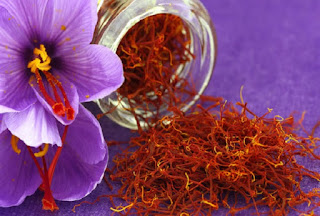 He writes: ÎœÎ¿ÏƒÏ‡Î¿Î²Î¬ÎºÎ· Anastasia, a Qualified pathologist
Apart from cooking the yolk or saffron used in medicine. For which diseases is indicated and what side effects has…
The crocus is a spice derived from the flower of Crocus sativus. It is widely known in Europe as safran.
This is a plant that grows to a height of 20-30 cm, purely cultivated since ancient times, which arose probably from the wild variety of Crocus cartwrightianus. The saffron has a height of 20-30 cm and bears up to four flowers with vivid crimson stigmas, which are harvested and dried to be used later mainly as a spice and coloring agent in foods.
The history of cultivation of saffron spans more than three millennia. Crocus like plant, dye, medicine, herb or condiment was known both in ancient Greece and among other ancient peoples. Some argue that it came from the East where he became the first cultivation.
Others argue that it originates from Greece, where it was first cultivated during the middle minoan period. This view reinforces a mural of that era (1600 bc.x.) “The ÎšÎ¡ÎŸÎšÎŸÎ£Î¥Î›Î›Î•ÎšÎ¤Î—Î£”, found in the palaces of Knossos and depicts a person, who gets flowers saffron in ÎºÏŒÎ½Î¹ÏƒÏ„ÏÎ¿. In accordance with the latest version, with the campaigns. Alexander popularized in the East.
Already from the Minoan era, the yolk looks that began to be used as a drug. The saffron is referred to in texts of ancient chinese medicine and is a component of the chinese pharmacopoeia. The medical use of saffron spread in Europe with the roman empire, languished after the collapse, was rekindled by the arab expansion, and was extended in America by the european settlers. The Arabs ÏƒÏ…ÏƒÏ„Î·Î¼Î±Ï„Î¿Ï€Î¿Î¯Î·ÏƒÎ±Î½ extensively the cultivation and medical use of saffron. The current cultivation of saffron in Greece (Kozani) has been introduced from Austria in the 17th century. More specifically, the moved people of kozani traders, who at that time maintained close trade relations with Austria. The first ÎºÏÎ¿ÎºÎ¿Ï€Î±ÏÎ±Î³Ï‰Î³ÏŒÏ‚ country today is Iran, but Greece produces high quality saffron.
In folk medicine it was used traditionally as an emmenagogue, antispasmodic and stimulant. The yolk today it is used in medicine, confectionery, baking, beverages, painting.
Saffron and modern medical uses
As in the case of all herbs when used for medical use, the doses used are much higher than dosages used for nutritional use. Must be taken well care of the herb to be free of impurities and there is appropriate medical follow-up to determine the dosage and duration of treatment.
The medical uses of saffron are due to a variety of biological active substances it contains. Saffron contains over 150 volatile and aromatic compounds with a variety of pharmacodynamic effects such as crocin (responsible for color), picrocrocin (responsible for the bitter taste), and safranal- (responsible for smell and taste), zeaxanthin, lycopene, Î± – and Î²-carotenes, terpenes, alcohols Ï„ÎµÏÏ€ÎµÎ½Î¯Î¿Ï… and esters.
Today, saffron is used by medical:
In problems of hypertension
In carcinomas
In situations of dementia
In anxiety and depression
In sexual problems
As an anticonvulsant
In situations of poor memory
In coronary heart disease
Infections
In ischemic retinopathy
In obesity
Side effects
During the nutritional use, in addition to allergic reactions in sensitive individuals, have not been described other side effects. However, the quantities used for flavoring of certain foods is minimal. Is contraindicated during pregnancy. In high doses saffron has been associated with haemorrhages, universal staining of mucous membranes, diarrhea, poisoning. Quantities of more than 10 g is directly fatal.
Source