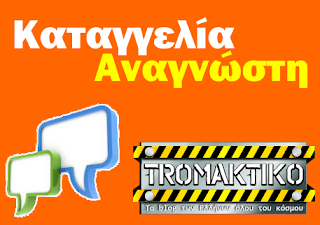 Dear tromaktiko,
According to reliable information, today at noon in the Hospitality Center….
refugees of Leros ,a woman, an immigrant attempted to set fire to nylon, to protest the lack of air conditioning in the container staying the+ refugees and for the false promises of the officials of the first host on the placement of the air conditioner. In the attempt of the Police to prevent the woman from this act, she will not hesitate to pull a knife, moving menacingly towards the Police. These, after having evacuated the space, by the presence of members of NGOS which at the time were on the point, and retreated, closing the main entrance / exit door of the Centre for Hospitality ensuring the safety of workers and employees of various M.K.The. Such was the mania of the above woman who would take him on in the door by taking a knife and trying to reach the Cops .Also threatening to cut her wrists. Then the woman Î±Ï…Ï„Î¿Ï„ÏÎ±Ï…Î¼Î±Ï„Î¯ÏƒÎ¸Î·ÎºÎµ in hand and Î´Î¹Î±ÎºÎ¿Î¼Î¯ÏƒÎ¸ÎµÎ¹ in the Health Center of Leros with the Cops manage to disarm. Thanks to the professionalism and composure that indicated the specific police Officers avoided the worst of it. At the same time about 20 refugees protested strongly to the employees of the First Reception for the living conditions in the Centre of Hospitality and for their promises regarding the installation of air conditioning in the container. It is unacceptable, especially during the summer months when the temperature in the interior of the container that housed immigrants-refugees reaches 60 degrees celsius there is no air conditioning, a refrigerator, and other basic kinds of smooth living now, who have taken huge sums from Europe and to give fans .
Reader