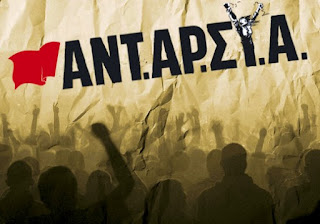 Immediately after the meeting of the… workers with the minister of the government Antonopoulos, which, once again bound by the memoranda and the anti-labour attack of capital and the EU, refused to respond to the legitimate demands of the workers (in substance dismissing), they got the real answer, which holds the government to the racing demands of the workers. Wood from the MAT, chemicals, injuries, and detentions in the police.
I guess the government has a very short memory. He forgets how fast he ate “the black darkness” the previous governments FAF, Papademos, Samaras-Venizelos, which accompanied the barbaric policy, with the iron heel of authoritarianism and the assault on democratic and social rights of people and workers. Tsipras and Î½ÎµÏŒÎºÎ¿Ï€Î¿Î¹ crusaders of memoranda of marching math the same way to the wastes of history.
ANTARSYA calls on the people and the workers, the mass movement and their bodies to stand by the struggling workers of the INDUS and of Robin of the Wood remaining outside of the Ministry of Labour on the road Stage.
Under the barbaric policy and the attack of capital-EU – government. Authoritarianism will not pass. Mass adamant struggle for the overthrow of the attack.