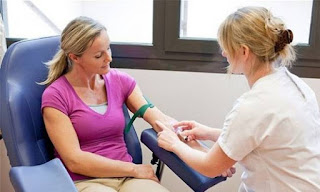 A diagnostic blood test that is done every year, can…
reduce by about one-fifth (20%) of the deaths from ovarian cancer, according to a new scientific research, the largest of its kind to date internationally.
The volumes of this relatively rare form of cancer -also called the “silent killer”- is often deadly, because they usually are discovered with a delay. The symptoms, which include pain or persistent bloating in the abdomen, it is easy to be misunderstood. Approximately 60% of patients die within five years of diagnosis. The disease usually occurs after menopause and this plays a role, and heredity.
So far there is a test for early diagnosis. The new study of 14 years, between more than 200,000 women aged 50 to 74 years of age, shows that the introduction of an annual test may be of considerable help in the early diagnosis and treatment of the disease. About 15 deaths can be avoided for every 10,000 women who will do the annual test.
But the researchers, led by professor Being ÎœÎµÎ½ÏŒÎ½ of the University College of London, who made the relevant publication in the medical journal “The Lancet” stated that it is still too early to suggest such a test on a massive scale and will require further studies within the next three years.
The test counts in the blood of women the level of a chemical of the protein CA 125, which is produced by the ovaries. But there is always the fear that -as with the blood test PSA for prostate cancer in men – there will be cases where elevated levels of this biomarker (false positives) lead to unnecessary surgical removal of the ovaries.