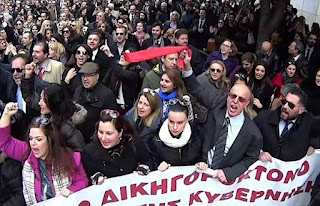 The continuation of the nationwide abstention of lawyers from their duties… to Monday, 22 February 2016 decided by the Coordinating Committee of the Plenary assembly of the Presidents of the Bar Associations of the country.
During the meeting the Steering Committee discussed the developments on the insurance.
The Steering Committee found that “there is until now no real response from the government to the demands of the bar body, for withdrawal of the insurance draft, start a meaningful dialogue with the social actors from a zero base and administration of specific quantified data, as well as the relevant actuarial study.
So we decided the continuation of the nationwide abstention of lawyers until Monday, 22 February 2016.