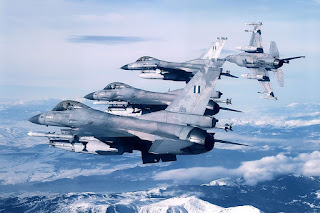 Another important distinction for the Greeks flying in a nato exercise in Spain…
Greece has participated in the program with four aircraft F-16 Block 52+ of the 343Î·Ï‚ Squadron of the 115 Combat Wing in Souda and corresponding support staff, as reported by the koolnews.gr.
Captain Papadimitriou, Epameinondas of 343M at the TLP (Nato exercise in Albacete of Spain) was declared the second best pilot of his fellow pilots of the member – states of NATO after the end of the exercise on 12/02/2016.
This is another very important success of the Air Force, the pilots of which are seen from the top of the world.
In the context of the education of the 343 Squadron undertook to design and perform protection missions in mixed formations, and missions of suppression of enemy Î±ÎµÏÎ±Î¼ÏÎ½Î·Ï‚ for the purpose of cooperation and inclusion of all staff in the implementation of this kind of missions.