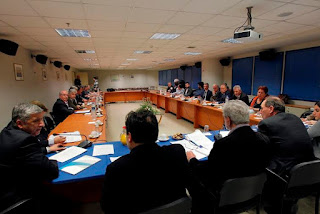 A meeting of Municipalities that have in their territory Port authority, with the Ministers of Economy, Development and Tourism, mr. Giorgos Stathakis and Shipping and Island Policy, mr. Theodoros Dritsas…
In the context of resolving a set of issues, of vital importance for the Municipalities and to a continuation of the initiative of the Mayor of Igoumenitsa, mr. Ioannis Lolos, was held on Thursday 18 February 2016 meeting of Mayors and representatives of Municipalities that have in their territory Port authority, with the Ministers of Economy, Development and Tourism, mr. Giorgos Stathakis and Shipping and Island Policy, mr. Theodoros Dritsas.
The meeting was attended by the Mayor of Igoumenitsa, mr Ioannis Lolos, the President of KEDE, mr. George Patoulis, the vice president and Mayor of Pylos Nestoros mr Dimitris ÎšÎ±Ï†Î±Î½Ï„Î¬ÏÎ·Ï‚ and the Mayor mr Yiannis Boutaris of Thessaloniki, mr Yannis Moralis, Piraeus, mr. Dimitris Loukas Lavreotiki, mr. Claus Labrinos Heraklion, ca. Dimitra Tsanaka of Kavala, mr. Claus Î Î¹ÏƒÏ„Î¹ÎºÎ¯Î´Î·Ï‚, Rafina Pikermi, mr. Christos Pagonis League and the: mr Ioannis Anastasakis, deputy Mayor of Heraklion, mr. Nikolaos Anastasopoulos, vice-Mayor of Corfu, mr Athanasios Mavroyiannis deputy Mayor Eleusis, mr. George Î”Î·Î¼Î±ÏÎ­Î»Î¿Ï‚ Executive member Municipality of Thessaloniki, and mr. George Danis Research Associate of the Mayor of Igoumenitsa. The meeting was also attended by the legal adviser.E.D.E. mr. Panos Zygouris.
The issues raised in mr. Ministers is the following:
1. Amendment of article 44 of the law 4150/2013 in order to include representatives of K.E.D.E. the Committee on Planning and Development of Ports (E.P.A.L.).
2. Legislative regulation for the participation of Municipalities in Boards of Organisations Port.
3. Concession of sections of land zones that are not used for the port activities of the Agencies Port the local Municipalities (excluding those permanently by the FUND.
4. Version E.D. or other legislative intervention, for the creation of a Municipal Port Fund of their respective Municipalities, under article 103, par.1b) of law 3852/2010 (Kallikratis) with clear and explicit authority.
5. Introducing a fixed-contributory contributions on income of Organisations of Ports in the Municipalities.
6. Installation of measuring stations in the pollution caused by the operation of the Port and the imposition of fees in case of exceeding the permissible limits, according to the principle “the polluter pays”.
7. Creation of integrated planning in all areas that operate Port, in order to make improvement projects of the association of Cities and Ports, as well as society and Port.
8. The urban planning of terrestrial band port should be made on the basis of the procedures provided for by the legislation.
It was also proposed the establishment of a joint committee of representatives of the Municipalities and of the Ministers for the immediate resolution of the above issues.
For their part, the Ministers declared positive in the direction of resolving the issues raised by the Mayors and Î´ÎµÏƒÎ¼ÎµÏ…Î¸Î®ÎºÎ±Î½ for a written and detailed response.
The Mayors, listening to the Ministers expect the answers and agreed that I would come back to another meeting once they receive the replies of mr. Ministers.
The Mayor of Igoumenitsa, mr Ioannis Lolos, after the end of the meeting with the Ministers proceeded with the following statement:
We have taken the initiative to join the Municipalities that we have in the territory of our Port authority and to claim the immediate resolution of serious problems that have a direct impact on the lives of our citizens.
In a meeting with the Ministers, we have set the main problems arising from the operation of the Bodies of Ports and we strongly urge the immediate resolution of them.
It is worth mentioning, that we have given particular emphasis to the concession by Presidential Decree of the terrestrial zones, which are not used for port activities, and finally to the Municipalities in order to give at last an end to the foggy landscape that’s been around for years.
We started a match and we are determined to continue, seeking solutions for the benefit of our Citizens, which has the central state to promote directly. 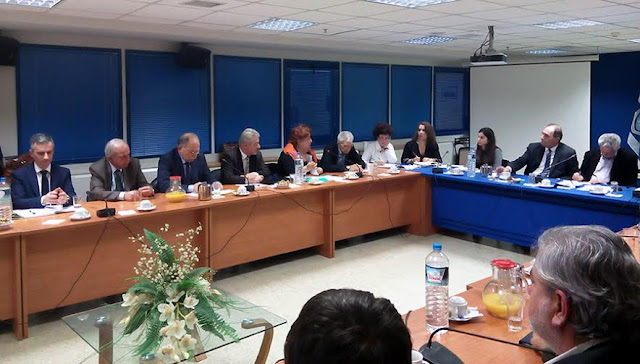