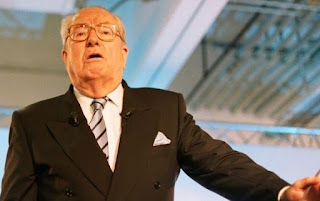 Jean-Marie le pen, the former leader of the extreme right in France, was sentenced yesterday by a court of appeal to pay…
a fine of 5,000 euros because the 2013 featured “irritant” and “smelling” the presence of the Roma.
The court of appeal of Aix-en-Provence found again guilty of the le pen for incitement to hatred and ethnic discrimination for those statements, which he had made during a Press conference in Nice.
“You have some problems, as it seems, with a few hundred Roma who have been in town a in the presence of an irritant, and let’s talk smelly”, he said at the time the le pen, honorary president of the Front National (FN), which it now leads his daughter Marine le pen, which precedes in the polls for the first round of the presidential elections of April and May.
“These are conditions to which I insist, because I believe them”, he stressed when he was tried for the disputed statements of the 88Ï‡ÏÎ¿Î½Î¿Ï‚ today le pen, who will be called on over 5,000 euro to also pay 2,000 euros to the organization SOS Racism, and eur 1,000 to the Human Rights Association, who participated in the trial as a prosecution.
The le pen to general surprise had managed in 2002 to pass to the second round of the presidential elections, which was defeated by a wide margin by the then president and again a candidate of the French right-wing Jacques Chirac.
Yesterday’s decision by added on at least eight counts of le pen from the 1990s for statements of racist character, or Holocaust denial.
The National Front, which is led by the 2011 Marine le pen, initiated a joint operation focusing on a campaign of “Î±Ï€Î¿Î´Î±Î¹Î¼Î¿Î½Î¿Ï€Î¿Î¯Î·ÏƒÎ·Ï‚” of the image, which eventually led to the removal of her father from the party of the French extreme right, after he repeated his statement about the gas chambers, which he considers to have been “detail” of World War ii.
The le pen appealed against the expulsion from the party to the courts, which recognize the right to remain honorary president of the FN.