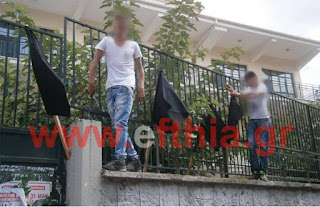 By order of the public Prosecutor, ended in the morning of Friday, the takeover of the 5th General Lyceum of Lamia, but not the…
2nd EPAL, despite the police operation that resulted in 16 arrests of students and a parent!
A total of 12 juveniles, and 5 adults went through the door of the Directorate of Police in Fthiotida prefecture, after they were arrested for the illegal occupation of public educational buildings.
The Police operation, which included, among other things, the necessary police paddy wagon was started by the 2nd EPAL of where they are located together, and the Vespers of the high School at 12 in the night. There, officers found and arrested 7 students aged from 17 to 23 years old, of which 4 minors.
It followed a similar operation on the 5th YELL county, where the arrests reached the number of nine students and three classes, and a 47Ï‡ÏÎ¿Î½Î¿Ï… parent. Finally all been released this morning.
As we were informed of the occupation on the 2nd EPAL in spite of the night’s “clear” to be continued, as a similar situation exists in the high School of Stylida, where the students react to the conditions and building deficiencies.
Source