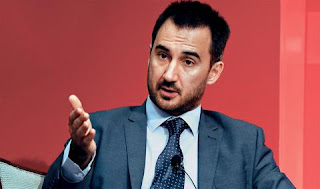 “We can’t go into an agreement that binds the Greek economy hand and foot in the long run,” said the… city of Volos, the deputy minister of Economy and Development, Alexander Î§Î±ÏÎ¯Ï„ÏƒÎ·Ï‚, to a question by ana-MPA, because not yet completed the negotiation for the assessment of the country.
Mr. Î§Î±ÏÎ¯Ï„ÏƒÎ·Ï‚ found in Volos, invited by the Association of Industries in Thessaly and in Central Greece at an event for the development and the perspectives that are deleted, made clear that “a great deal of effort in the previous period in order to complete the evaluation process as soon as possible, since it is the will of the Greek government to proceed with the completion of the significant pendency of the economy, which we believe will release a very important dynamic in the next period of time from the productive activity in our country”.
The minister added that “for this to happen, i.e. to complete the evaluation, it must be done with conditions that will make it sustainable for the Greek economy. It has become clear to everyone – and they are many in Greece, but in Europe that understand the importance of resolving this issue. I think the next time we will have positive news” reported.
In his statements mr Î§Î±ÏÎ¯Ï„ÏƒÎ·, replied the president of the Association of Industries in Thessaly and Central Greece, Eleni Koliopoulou, leaving many spikes on the delay of the completion of the assessment of the country, and saying that “we are very concerned about the instability and the fact that he has not yet closed the second assessment. We don’t have other margins. I had to run with a thousand, and we slacken off. We’re supposed to be already in flight, and the landscape is blurred in our country, but also abroad”.