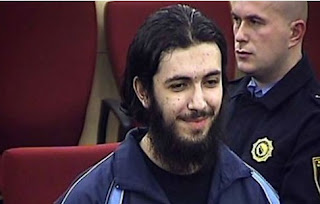 A leading member of Al-Qaeda in the Balkans, it turned out that it is ultimately the Bosnian Ï„Î¶Î¹Ï‡Î±Î½Ï„Î¹ÏƒÏ„Î®Ï‚, who…
was carrying military equipment and was arrested in Alexandroupolis together with a man from Yemen.
With the “name” Maximus were active in the Balkans and the rest of Europe, according to data obtained from surveys that took place in 2005 for the action.
Destination of the Maximus was the Turkey, from where it would reach on Islamic State, carrying munitions of war. Too bad for him, but luck, the cops in the Group of Zeus he was arrested after checking for suspicious behavior in the KTEL of Alexandroupolis.
On it, except for a machete and military equipment, were found to 4,400 crowns of Sweden, 1,250, $ 600, and 3,600 to Â£ Î£ÏÏÎ¹Î±Ï‚ and 2 mobile phones, which at this time are scanned for further data.
The Bosnian had been arrested for the first time since the anti-terrorist Authorities in Britain in 2005, during an assault at his house, where they found explosive belts and explosive materials, but a video describing the same mask to threatening terrorist attacks on Capitol hill and the White House. Then he was sentenced to 14 years in prison, but was released a few years later.
The second Ï„Î¶Î¹Ï‡Î±Î½Ï„Î¹ÏƒÏ„Î®Ï‚, Al-hasani, a worldwide leading Amer, originally from Yemen.
The two arrested have been detained so far by the Police department of Alexandroupoli and refuse to answer the questions of the police. In parallel led to a prosecutor’s office and were referred to a regular judge, to which will be taken on Tuesday.
Finally, we emphasize that the investigations of the past of the two men has taken on the NSA. Investigate already the route, the final destination, but also the activities of the two detainees.
See how he was making bombs in the Balkans, a senior leader of Al-Qaeda.