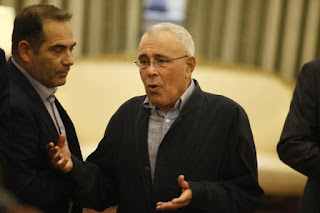 “Let’s see how will be the package of measures we propose. If you don’t burden it at all, neither tax nor pensions for 2017 and 2018, and talk about measures that will…
concern for after 2019, we’ll see. Who lives, who dies after 2019,” said the deputy minister of Education, Kostas Î–Î¿Ï…ÏÎ¬ÏÎ¹Ï‚ invited to comment on the new requirements of the lenders to close the second assessment.
Mr. Î–Î¿Ï…ÏÎ¬ÏÎ¹Ï‚, speaking to the Xenos fm, he added that “if we say that any charge to commence after 2019, it means that we won two years ago. This means of trading, this means resistance” and wondered if the 2019 there will be Greece, there will be a Germany, there will be EU.
He stressed, however, that if the government accept new measures for now will be a heavy defeat. When asked to comment on the delay in the negotiation, stressed that “the negotiation is two. Greece is beaten. The defeated has a tendency to impose absolutely the power. If negotiations are delayed is because we resist. In many ways”.
For the rumors on the removal of teaching the Antigone in high School, said he has no idea whether there was a recommendation to the ministry of Education, stressed that obviously you can’t, there was smoke without fire, and featured horrible such a possibility.