Î•ÏŠÎ½Ï„Îµ: “In time the solution will result in more wealth... 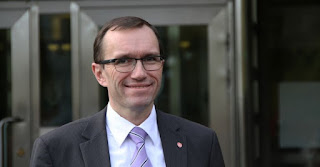 The President of the Republic, mr Nicos Anastasiades accepted , in the… Presidential Palace, the Special Adviser of the UN SECRETARY general on Cyprus, mr Espen Barth Eide.
After the meeting, mr Eide told reporters, among other things, that he had a good discussion with President Anastasiades and stated that the next meeting of leaders will take place next Saturday, 13 February, while yesterday met the negotiators who will again have a meeting tomorrow.
Referring to the meeting of the negotiators in Brussels, mr Eide, the featured “historic,” noting that “has never happened in the past in this form. Them were at the highest level, including President Juncker. The negotiators had very good discussions with presenting the views, not the terms, but the common views”.
He added that they took assurances for the EU’s full support for the work that is being done in Cyprus not only from a political point of view, but also technocratic, as are the preparations for the full implementation of the acquis in the northern part of the island. He noted that it is very important to have the support of the EU.
Asked about the economic aspect of the solution, he said that there is a combination of things, such as, for example, contributions from countries and from the private sector.
“In Cyprus you are talking about the cost of the solution as you’d lose money. The reality is that all the economic studies, which is supported strongly by international economists, they say that in time the solution will result in more wealth than the non-solution. Having a united island, in peace internally and with its neighbours will create more growth, more jobs, more prosperity.
The only issue is that they need initial capital to make the initial investment. And this is money that will come to the island, they don’t leave the island,” said mr. Eide.
He added that a reunified Cyprus will attract private investors, which is something agreed between the two sides.
Asked if the reunited Cyprus will be a further development of the Republic of Cyprus, mr. Eide referred to in the joint communiquÃ© of 11 February 2014, noting that this is the basis for all discussions.
To a question whether the talks are at a stage where the people must be informed, he said he is in favour of transparency, however, he added, there are issues in the negotiations are complex and interrelated, which can only be perceived if the face in a wide context.
He stated that these issues are the leaders and the issue of public communication is something that we will discuss it, while he pointed out that in the recent resolution of the Security Council stated that the public communication on this issue is of paramount importance.
Source