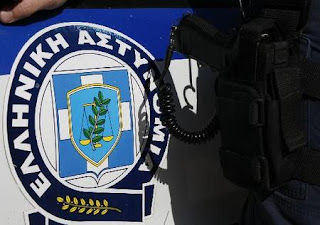 Î•Î¾Î¹Ï‡Î½Î¹Î¬ÏƒÎ¸Î·ÎºÎµ, by officers of the Security sub-Division of Piraeus robbery case against 89Ï‡ÏÎ¿Î½Î·Ï‚ of a resident, which resulted in the fatal injury and which is committed to the 25-9-2015 in Nice.
Perpetrator is a 37 year old national ROMANTIC, which was detected in the early hours of 4-12-2015 in the Pigeon and he was arrested.
In weight, is formed, prosecution for the offences of the robbery of which occurred death of a person, the violation of restrictions of residence and of defiance.
In particular, in the early hours of 25-9-2015, the 37 year old arrested, a passenger in a two-wheel motorcycle and wearing a helmet, approached and removed with the use of violence by the 89Ï‡ÏÎ¿Î½Î· a bag containing a sum of money which was earlier disbursed from bank branch, with the result that the fall of the ground and the injury. The victim of a crime was taken to Hospital where he later ended up.
The Security Sub-directorate of Piraeus, after a long, methodical and thorough investigation, during which used all of the data and the data of the Ï€ÏÎ¿Î±Î½Î±ÎºÏÎ¹Ï„Î¹ÎºÎ¿Ï material, identify and locate the offender.
In his possession was found and seized the helmet and the two-wheel motorcycle, which he uses as a means to commit the crimes.
After further investigation, it was verified that the offender along with one more accomplice who has been identified and is sought, committed the same way, from the beginning of last September, six (6) robberies and one (1) theft against the elderly, in various areas of Attica.
The arrested, led to mr public Prosecutor at first instance Piraeus, and was referred to a Magistrate, who ordered her temporary detention.