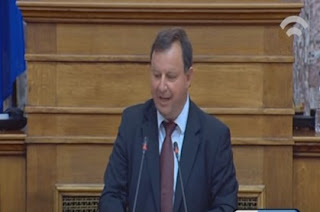 Ladies and gentlemen, we are discussing a new development law, which, as appeared from the observations of the bodies, brings…
definitely paperwork, but no development. There are very serious shortcomings that he has described very aptly by the Rapporteur.D.. The most basic weakness of the bill is that it throws money in the market.
We have heard from the Minister that a 70% of the money intended for the mature designs of the two previous investment laws, without it being clear how many of these eventually and when it will fall in the market. While, the aid of the new law will begin to be pumped into the market too late, from 2018 onwards.
Another great weakness is the conditions under which will we be given the aid and have nothing to do with the current reality of the market. Not advance any aid in the beginning of the investment. The terms of payment of the grant, i.e., of the aid money is excruciatingly tight. Required by the entrepreneur has to pay half of the total cost of the investment is to enable half of the aid, and after covering around 25% of its own participation. How and from where, at a time when bank lending is a pipe dream for most businesses, it seems that I don’t mind the legislator.
As for the companies in the earlier development, these will be waiting for you, mr. Secretary, for up to 7 years to get all the subsidy and let’s run the debt obligations and have to pay for letters of credit. You are aware, mr. Minister, who today can pay letters of credit for 7 years? It is an important issue and, frankly, it needs a particular assessment and evaluation.
Ladies and gentlemen, I think we need to see more attention all of these omissions that probably the Minister has not even appreciate it.
One of the main purposes of the bill is to reduce the striking inequalities between the different regions of the country. The purpose of this is supposed to be fulfilled by the status of the specific areas referred to in article 12. I say “supposedly” because with the criteria you have entered, left out whole areas of serious underdevelopment. The big question here is what are considered to be frontier regions.
We read that it is the areas, the municipal units, which have a distance of 30 kilometers from the border. Yes, the draft was 20 km away. Minister, you chose to copy the definition of the border area in the law 4024 / 2011, determined which employees the public is entitled to allowance of remote and border areas.
But, it’s one thing to decide for the criterion of a wage provider and another thing to use the same criterion to give investment incentives.
The financial profile shows the comparison of the first.E.E. with the average for the country. The indicators of employment and unemployment, and total investment, as well as other such items. For example, Thesprotia interests me beyond all the others, had a negative change in the A.E.E. the, already from the time of the A.E.E. of the country increased by 7%. The period of the recession, the unemployment rate deteriorated at a rate much larger than other regions, and yes, it has permanent characteristics.
So, you have included almost 85% of the county, however, there is a 15%, but the main development areas. There can be activities. I appreciate that there is the possibility on your behalf to join the whole of Thesprotia as a border, Î±ÎºÏÎ¹Ï„Î¹ÎºÏŒÏ‚ and poor law.
Finally, I believe that using counties 3978 / 2011, and 4278 / 2014, speaking for the border regions, to get the whole of Thesprotia. Like I said before, this is the minimum that is left out, but the main development areas and will be a useful move, and by you.