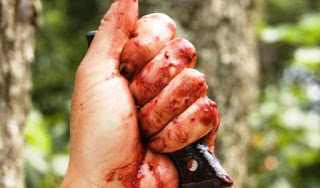 The Hospital of Kalamata, in the hospital, the 46-year-old man…
that Saturday afternoon injured himself with a knife in the abdomen, attempting to put an end to his life.
The incident happened around 6:30 in the afternoon on Saturday, and while the 46-year-old national of Albania, was in his house in Zacharo with the wife and the minor son. Without saying anything, went out to the backyard and stabbed herself in the abdomen with a kitchen knife.
The man was taken to the Hospital of Kyparissia and from there, after they offered the first aid, it was considered necessary the evacuation of the Hospital of Kalamata.
The incident was the first.T Zacharo, officers of which they found and seized in the backyard of the house the knife that the 46-year-old attempted to commit suicide, while informed for the psychological problem and the medication he was on.
Source