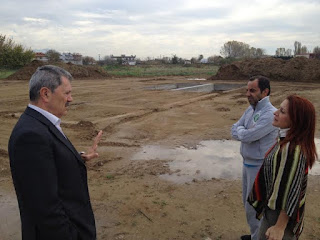 The work of the 3rd Kindergarten. Magnesia, which was founded in… early October, he visited the Mayor of Delta Efthimios Photopoulos, accompanied by City Councilman Costa Î”Î¿Ï…Î¶Î´Î±Î¼Ï€Î¬Î½Î· and the President of the Local Council Wisdom ÎšÎ±ÏÎ±Ï€Î±ÏÎ»Î¿Ï….
The new School is funded by the Building Infrastructure SA and is expected to be completed until September 2016.
Also, until the end of 2016 is going to be delivered also a second kindergarten in the Sindo while completes the addition of 6 classrooms at the high School. Magnesia.
It has already become a contractor for the construction of the 2nd Elementary School in New york. Magnesia, while studies have been completed for 10Î¸Î­ÏƒÎ¹Î¿ Elementary School in Diavata.
The project completed the configuration of the courtyard and the restoration of the building of the 3rd Kindergarten Kalochori, while it is in progress and completes the connection with the natural gas.
Extensive renovation works were carried out and in the 1st and 2nd Municipal Kalochori.
Renovated high School Kalochori with restoration roof (waterproofing and change tiled roof), replacement frames, replacement of radiators etc.
Has been completed and the study for the restoration of the nursery Sindos (stop OASTH), a work which remained for about ten years unfinished.
Finally, completed the studies in all schools for the installation of natural gas.
On the subject of the School Housing the Municipality of Delta, mr. Fotopoulos said:
“From the first day in the administration of the Municipality, we gave the promise to the teachers, the parents and the children that will be in practice next to the schools. So, we started a great effort to keep the Schools in the best possible condition, something that only easy it’s not given the reduction of state funding to the School Boards.
So, in schools of Primary and Secondary Education, we moved to maintenance work (repair and paint) 80% of the schools in the Municipality, some of which had to accept such interventions over 10 years. We made sure to pay in a timely manner with the heating, although we didn’t get the corresponding subsidy from the state. We paid the cleaners and took care to ensure that all the necessary actions for the health (pest control, etc.). Finally, we made sure the Schools don’t face problems with regard to their functional (photocopying, stationery, etc.).
Sure, there’s always the best to remind us that the effort never stops, however congratulations to all those who have contributed to our schools this year is at a very high level.
Also, despite the fact that it is extremely difficult the construction of Î£Ï‡Î¿Î»Î­Î¹Ï‰Î½, we manage to complete new schools, improving even more services to their citizens -parents, students, educators”.
The councilman and Chairman of the School Committee Secondary Education Kostas Î”Î¿Ï…Î¶Î´Î±Î¼Ï€Î¬Î½Î·Ï‚, pointed out:
“Despite the economic crisis and the difficult times that we are experiencing, we are with the economy, with coordination and tuck to make it work. With proper money management we strive and we are helpers to each call manager or association of parents and guardians to cope. Thanks to the members of the School Committee, the directors and Parents ‘Associations organized for cooperation”.
For his part, the Municipal Councilor and Chairman of the School Committee of Primary Education George Î‘Î³Î³Î¿Ï…ÏÎ¬Ï‚ said:
“I want to thank the members of the School Committee and the directors of the schools because all of us together, in spite of the problems due to the reduction of funding from the Ministry, we managed the best possible result on the proper functioning of the school units, both operational and in infrastructure. Driven by the fact that there is always the best, we continue our efforts”.
According to the data of the School Committees and Services of the Municipality of Delta, in the last few months made actions (repairs, interventions in infrastructures and equipment):
Primary Education
Â· In The Kindergarten Of Agia Sofia
Â· In the 1st and 2nd Kindergartens East
Â· In Kindergarten Î’ÏÎ±Ï‡Î¹Î¬Ï‚
Â· In Kindergartens of Sindos
Â· In the 1st Kindergarten of such a party pooper
Â· At the 2nd Kindergarten of such a party pooper
Â· In the 3rd Kindergarten party pooper
Â· In the 1st and 2nd Kindergartens ÎšÏ…Î¼Î¯Î½Ï‰Î½
Â· In the 1st Kindergarten of Kalochori
Â· At the 2nd Kindergarten of Kalochori
Â· In the 1st Kindergarten ÎœÎ±Î»Î³Î¬ÏÏ‰Î½
Â· At the 2nd Kindergarten ÎœÎ±Î»Î³Î¬ÏÏ‰Î½
Â· In Elementary School East
Â· In Elementary School Î’ÏÎ±Ï‡Î¹Î¬Ï‚
Â· The 1st Primary Kalochori
Â· In the 2nd Primary Kalochori
Â· The 1st Primary School of ÎšÏ…Î¼Î¯Î½Ï‰Î½
Â· In the 2nd Primary ÎšÏ…Î¼Î¯Î½Ï‰Î½
Â· In Elementary School ÎœÎ±Î»Î³Î¬ÏÏ‰Î½
Â· The 1st Primary School of Sindos
Â· At the 2nd Primary School of Sindos
Â· In the 3rd Primary School of Sindos
Â· The 1st Primary School of Chalastra
Â· At the 2nd Primary School of Chalastra
Â· In the 3RD Municipal party pooper
Secondary Education
Â· The Professional and the General high School, industrial area of Sindos
Â· In High School Sindos
Â· In High School Diavata
Â· At The General Lyceum Of Magnesia
Â· In High School Kalochori
Â· In A General High School Such A Party Pooper
Â· Professional High School Party Crasher
Â· In The General High School ÎšÏ…Î¼Î¯Î½Ï‰Î½
Â· In High School ÎšÏ…Î¼Î¯Î½Ï‰Î½
Â· High School East