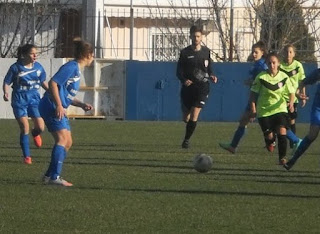 Is the big underdog on the map of the sport, at least in our country, and we are talking about women’s football. In…
the shadow of the men’s championships and the subscription broadcast of foreign leagues, the Ï€Î¿Î´Î¿ÏƒÏ†Î±Î¹ÏÎ¹ÏƒÏ„Î¯Î½ÎµÏ‚ are far away from the picturesque figures of women â€“ footballers â€“ ballet of the old Greek movie “Rena is offside” (sample perception of the role of women in sport, for one season) and bring their own battles on the pitch and even under the weight of large organizational problems.
Let’s look at the football map of women’s football leagues consisting of:
10 teams is A National (16 is the league â€“ A men’s National team).
18 groups of the B National women in a total of three groups (18 groups, the football league â€“ B men’s National team).
40 groups of the C National, in eight groups of from four to six teams per group (64 groups has the football league2 â€“ C men’s National team in four groups).
Set well women’s groups in national categories 68, with the assumption 22Î¬Î´Î± athletes per group, mean 1.496 Ï€Î¿Î´Î¿ÏƒÏ†Î±Î¹ÏÎ¹ÏƒÏ„Î¯Î½ÎµÏ‚. A number sure to be larger, after and in local tournaments, there are football teams for women and in some clubs there are and infrastructure. A separate chapter are the athletes â€“ students who give up their fight in a dual level, and for that they deserve the respect and support of all of us.

Agia Paraskevi
It should also be noted that women’s associations do not necessarily reflect the organizational field, and with men in the context of their operation within a single sports club, cultivating the sport in various versions, since some of them are independent.
In addition, in many areas, especially in the province, are often the only athletic outlet for women in sport, which emphasises the social contribution of specific associations.
Seek the interpretation of the many groups in the women’s football in effort to reduce transportation costs (moving, feeding, overnight stays) are invited to address clubs and EPO from meagre funds in difficult times and with attendance clearly smaller than the men’s football leagues..
And again the problem remains as a headache for the administrations of the groups.

We were talking about the financial problem, and for the partial relief, a bit of gentle dances, parties, dinners, lotteries, calendars, sponsorship professionals, and nights of spaghetti. The latest report is, and the less widespread and is a traditional method of supporting clubs (not just sports) on the island of Ikaria, where it is usually in communal areas, with a voluntary offer of materials and labour, becomes a night of spaghetti (and thus low operating costs) and the entry ticket goes to the fund of the organizers.
It is certainly true that the behaviour of (not many I must say) fans who attend matches ladies championship, is quite different from a number of football matches for men and much more mild and civilized.
Although numerically the common is below that of men’s leagues and “read” on the sport and the rules of the is and faithful giving this regularly, once in the stands, heard reviews, and comparisons are made and estimates for the fights that preceded it, but for those who follow.

Let’s not be in a hurry to make comments on the technical training of women footballers, because high are several (clearly the average in this matter falls short of men’s leagues) and have occasionally been made of such transcripts in the male soccer (football slang, the so-called “coats”), making any attempt of comparison unfair and biased.
Ask yourself what you prefer to hear on the field, the criticism that the so-and-so goalie doesn’t block the ball in order to not ruin the manicure (the most “hard” comment that we’ve heard in those women’s races we have attended), or suspicion (often be verified) that a game of men’s league is rigged.
But surely there is a difference in power, for obvious reasons. In conclusion, we highly recommend you to give this, whenever you can, in matches ladies championship, where it is certain that during the race I will shoot you with a flare gun, wouldn’t you Ï€ÎµÏ„ÏÎ¿Î²Î¿Î»Î®ÏƒÎ¿Ï…Î½, will not throw away coffee, stones, or any kind of objects and will not ÎºÎ±Î¸Ï…Î²ÏÎ¯ÏƒÎ¿Ï…Î½ in chorus.
In the end, you will have the pleasure to applaud both teams for their effort. A little is these days?
Source