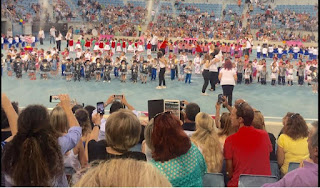 Hundreds of children of the Municipal Kindergarten celebrated the summer with dances of yesterday and today, in the tennis court of the olympic STADIUM, winning the…
liberal tap jockey, warm applause of the audience, who participated in the special celebration.
The children of our friends who hosted the 11 Kindergartens, dressed in uniforms depending on their role, “traveled” dance in the passage of the decades, with gusto and verve, in the presence of the Mayor of Maroussi mr. Giorgos Î Î±Ï„Î¿ÏÎ»Î· and the hundreds of parents who had filled the space to ÎºÎ±Î¼Î±ÏÏŽÏƒÎ¿Ï…Î½ little dancers and dancers.
The Mayor of Amaroussion mr Giorgos Patoulis has welcomed young and old, providing a warm greeting, in which, inter alia, stressed the firm will of the Administration of the Municipality for the provision of high quality services to the children of Municipal kindergartens, together with the undivided interest for the support of each Î¼Î±ÏÎ¿Ï…ÏƒÎ¹ÏŽÏ„Î¹ÎºÎ·Ï‚ family, and especially the working mother.
Referring to the construction of a new Kindergarten in the Scissors, he noted that there is a mature study of early 2015 for the construction of a model sustainable Plant in the region. For the construction â€“ added – to push the Region for funding, which we are entitled and we are confident that we will meet, so all of the ÎœÎ±ÏÎ¿Ï…ÏƒÎ¹Ï‰Ï„Î¬ÎºÎ¹Î± to have the amenities and infrastructure they deserve.
While mr. Patoulis thanked the parents who entrust their children to Communal nurseries, pointing out that together we can accomplish a lot of remarkable for our city.
The President of the ÎŸÎšÎŸÎ™Î Î‘Î”Î‘ ms Eleni Lekka, inter alia, thanked the large family of Municipal kindergartens, with particular reference to the Management and the workers for their tireless efforts, in order to provide the best care to the little ones.
The event was also attended by the President of the Municipal Council Epaminondas Ironside, Mayor Spyros Î£Ï„Î±Î¸Î¿ÏÎ»Î·Ï‚, the Vice-president of the ÎŸÎšÎŸÎ™Î Î‘Î”Î‘ Katerina Ioannou and the Councillors Dimitris Karlaftis and Peter ÎšÏŒÎ½Î¹Î±ÏÎ·Ï‚.