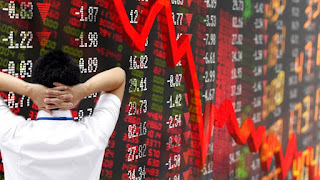 On the occasion of the fall of stock indices in the last few days the economist Max When it considers that the new financial…
crisis that emerges will be worse than that of 2008. And Germany will suffer.
On the occasion of yesterday’s fall in the stock market of Athens and the extremely negative indicators recorded in the major european stock exchanges in Paris, Rome, London and Frankfurt, the German economist Max When he spoke on the German radio (Deutschlandfunk), giving answers to burning issues. The global economy seems to be weakening, as shown by the example of China, the U.S. and mainly Europe. Almost eight years after the great financial crisis of 2008, the German economist, expresses strong concern for a repetition of the events.
“What we had then was the threat of a financial panic, a nervous breakdown or a cardiac infarction of the financial system because of the financial bubbles. This situation we were able to fight with too much cheap money, so we cooled off the system for a period of time. However, we have not treated the causes, and now they come to touch many individual factors, creating a complicated situation”.
The expert’s diagnosis for the “patient” called global economy is not optimistic: “it Is a sum of a great many chronic diseases, in which we fought against only the symptoms and not the causes. For this, the new situation that is deleted, even if it is not causing panic in the narrow sense, it is much more dangerous in relation to all those issues that are not solved in 2008, and we have postponed for the future.”
“Even in Germany things are going well”
However, this economic chaos is not seems at first sight to touch Germany. However the Max When it seems to have a different view on this: “The small and medium-sized enterprises operate. The suppliers operate. Germany has become something like the workbench of the West. However the large companies, they are systematically smaller by a very, very small. Where are the big business groups that participated in international competition, such as Thyssen-Krupp, Deutsche Bank and Siemens? Can no longer be heard”.
The German specialist closes by pointing out: “There are two levels. Yes, the economy works, we produce a lot, but what do we do with the surplus? Give it away again in the EU. The middle class becomes poor and the potential to save significantly limited. The silent expropriation of spreading. This is complicated. In this sense, well, I don’t want to say that in Germany things are going well. Yes, we have relatively few unemployed, but at what price?”.
Source: Deutsche Welle
DLF – Alexandra Cosma