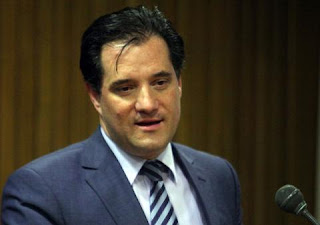 To carry out direct elections in the country, to leave the government ” and to make people aware, that the evaluation is the way to the most severe measures will come, and will affect society and the economy…
This supported the vice president of new Democracy Adonis Georgiadis from the town of Rethymno, where he was found tonight, the official guest of the ÎÎŸÎ”Î• Rethymno, for cutting the new year pie of the organized members of the party in the county.
“Unfortunately, the measures that are coming will be too heavy and there is no doubt that the government will sign them all, because it is such a passion for staying in power, that is not going to stop anything. In the next few days I believe that, the developments will be rapid and the assessment that I don’t know when it will close, it will proceed with costly measures, unnecessary and concerning the consequences of a government that can’t do a good job of,” said Adonis Georgiades, claiming that it will be very difficult the exit of Greece in the international markets, and how very quickly the country will turn to the well-known misery.
The real life for businesses, the unemployed, workers and pensioners, it is very difficult at the same time there is no visible way out, no matter if as commented the vice-president of the New york.D., the ministers of the government pat themselves on the back for their decisions. “For this reason, the New Republic is asking for elections, because these are the measures we can to avoid it. Unfortunately, however, comes a new memorandum, which will bind for years, yet the Greeks”. He believes that the economy of a place moves when moving on reforms and the necessary changes for the good and the good of society. “The government” doesn’t do anything positive, with the result that the economy us in this hour to find in the anemic growth rates, not able to get us out of the vicious circle where we are…”
Stability
To a question on whether the elections affect the economy and society, Adonis Georgiadis said: “Usually the markets don’t want elections, but stability. In Greece, however, with mr Tsipras has become something magical. The markets are the same they want an election, because the people dealing with the money, have found that the Greece government Tsipras, has opportunities for investment. Because the government does not reduce public expenditure, because it does not reform, because it increases taxes, and many other well-known reasons. So, those who deal with the economy and need to bring their money in Greece, they say, as long as it remains the Tsipras government in Greece will not see god’s face. The elections well, it’s good for our economy, given that this toxic government will go.” In fact, he pointed out that even the pillar of economy for the island and not only is tourism, not affecting the ÎµÎºÎ»Î¿Î³Î¿Î»Î¿Î³Î¯Î±, but the taxes, the VAT and the policies they fight for the business and the revenue of the business.
Mr Georgiadis commenting on the happenings in the field of Health, as as said that, the responsible minister and deputy minister is from Crete, said that: “Never in the National Health System was not in a worse situation. The hires that have been announced relate to a decision personal to me, as former minister of mine and had written to the then budget of 4,000 recruiters. As many recruiters have made, relate to other staff, non-medical and nursing, now that there is a need for doctors and nurses, and no security guards and cleaners”.
The government’s reason for corruption in Health and shows the previous ministers, Family, Georgiadis, Salma and Voridis, on matters pertaining to medicines -according to mr Georgiadis, who as he said: “I have Tabled, however, some time ago a question, asking mr Î Î¿Î»Î¬ÎºÎ· for the provisions which they found, where we have increased the prices of drugs of some companies… so I’m Asking these provisions have been removed? As former minister, I want to let you know that drug prices on average fell by 60%. Cumulatively, the ministers I have mentioned before, reduced the pharmaceutical public expenditure of about 3 billion. euro. The government of SYRIZA – ANEL has reduced the pharmaceutical public expenditure in two years. They haven’t cut even one euro, and yet they blame us and this is called a nerve”.
Speaking of the landscape in the area of SMES Adonis Georgiadis said that New Democracy believes absolutely in the necessity of a regional Type and sustainability of SMES in the region. “As a government, will proceed in accordance with the positions and the views and the president’s own us Kyriakos Mitsotakis, in the legislative initiatives, in order to solve the chronic problems that have become more difficult for this industry, in the years of the crisis, with all that this implies”.
From the side of the mp of the party in Rethymno, John, Gaea, who accompanied him, Adonis Georgiadis, asked by the locals, as he said: “…to trust the “symphony of Truth”, which has proposed and championed the New Republic and to citizens, as another proposal for sound governance, policy and management of the problems of the country, with the aim to get out of the difficult path that has been in the last few years in Greece”.
Source: ana – MPA