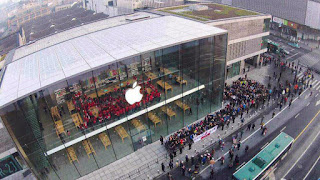 468 stores of american giant change…
form and converted into classrooms for the sake of the framework educational programme planning – Support of Obama and Cameron
The Apple is converted to… school this week, as well as 468 stores change form and converted into classrooms for the sake of the annual educational program entitled “Hour of Code”.
This program is an international effort to offer those who are interested in introductory knowledge of computer programming. As it turns out, this project is particularly important for the company, as well as one of the top executives, Craig Federighi commented that he hopes to “ignite the spark” in young students. He stressed that the job of the developer is “incredibly creative, similar to the composition of music”.
The “Hour of Code” is applied in 180 countries, while last year it is estimated that it was attended by more than 100 million people. At the same time, the approval and the support expressed by the American president Barack Obama, British prime minister David Cameron. Similar statements he has made Bill Gates, and representatives of the companies Microsoft, Google, Facebook and Amazon.
Apple, by oral Federighi, expressed the great usefulness of the seminar programme, as well as the lives of the people is so closely associated with the technology, so that to know the “language of computers” it’s like he knows how to read and write.
The same Federighi, in fact, commented that he started experimenting with computer programming from the age of 10 years old. Characteristics, stated that: “The first time I realized that by typing in some commands on the computer, cause something different, it was a revelation for me.” The high-ranking executive of Apple continued to support the importance of the project, stating that the programming is a language and a kind of thinking, while he stressed that in the future will be the “next level of literature”.
The Federighi continued, expressing his personal desire to have most often used the facilities of the company as classrooms. As, in fact, revealed by the Apple at the beginning of the was also closely associated with the field of education. More specifically, he commented that: “there is No doubt that the value and meaning of technology lies in the education of young minds”.
Source