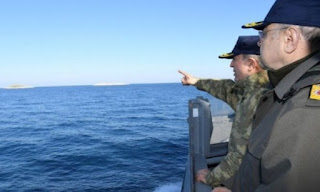 Communications show, it seems that he set up…
yesterday, the Turkey on the day of the 21st anniversary of the Incident, when Turkish rocket ship attempted to approach the specific area.
The rocket ship was the chief of the hellenic Army General Staff, Hulusi Akar, who boarded from the port of Bodrum (Halicarnassus) and reached up to the rocky islands found at the heart of the Greek-Turkish crisis of 1996. According to a statement by the Turkish general staff, the Turkish general made a visit to the Sea, without being able to disembark, and then flew by helicopter over the area.
The leadership of the Turkish forces, which was accompanied by a photo crew, pose with a backdrop of the rocky islands and left, with the challenge of keeping you just a few minutes.
In the area rushed to the Greek regime of “Strong” which called on the Turkish ships to leave Greek territorial waters and at the same time, and the Turkish ships called on the Greek ship to leave the area.
What he wants to achieve the Anchor
The challenge of Turkey does not seem to be random. Î£Ï…Î¼Ï€Ï„Î¯Ï€Ï„ÎµÎ¹ the completion of 21 years from the events of the Incident, with the decision of the supreme Court not to issue the country of their eight Turkish officers, with the losses of the Turkish army in Syria and with the upcoming referendum on the aid Ï„Ï‰Î½ÎµÎ¾Î¿Ï…ÏƒÎ¹ÏŽÎ½ of Erdogan. Turkey restores the grey claim and seem to be fighting back in Athens for the non-adoption of the 8 making a show of power.
In the notice of the General Staff of the Armed Forces of the Turkey after it is confirmed the presence of the head referred to, among other things, “the Turkish Armed Forces continue with vigour their efforts to defend the rights and interests of the country and of our nation on land, sea and air”.
The minister of Defence of Turkey Fikri Î™ÏƒÎ¯Îº said that “we want every issue to be solved peacefully. […] But everybody should know that Turkey will not bow to a fait accompli in the region”.
The reaction of the Greek side, the ministry of Foreign affairs and the Maximus was calm and measured, while respecting the decision of the Greek justice, of the non-version of 8.
The announcement of the General Staff of National Defence
“Sunday 29th January 2017, a rocket ship of the Turkish Navy, and two boats carrying special forces which accompanied it, have approached on the hour 11:00 the band of n. Imia, where they remained for about 7 minutes in the wider marine area, violating during the movement of the Greek territorial waters (Î•Î§Î¥).
From the Greek side, in the above sea area, there were vessels of the Coast guard as well as a Gunboat for the Navy, which was constantly followed the movement of the Turkish vessels.
With the entrance of the Turkish vessel in the Î•Î§Î¥ taken directly all the actions notification of removal.The Turkish vessels then were removed, with destination the port of Bodrum,” said the announcement.
Pavlopoulos: Turkey to respect the borders of Greece and of Europe
“I want to say to her friend and neighbor Turkey that it must respect the history, friendship and good neighbourliness. It is not enough to say that we are friends but we have to prove our friendship,” stressed the President of the Republic, Prokopis Pavlopoulos, during interview to Portuguese tv APTP.
“Today’s violation was very serious because it is not illegitimate only the Greek sea borders from Turkey and the borders of Europe. Breached the treaty of Lausanne. I hope that there will be no repetition in the future because that will have consequences not only in bilateral relations but in the relations of Turkey with Europe,” he said on the occasion of the Turkish challenge.
Vitsa: The Greek border is inviolable
“The English borders, land, sea and air is and it will be inviolable and will not be put on any table of negotiation” stated “in all directions beyond the Greek borders”, the deputy minister of National Defence Dimitris Vitsa.
“The question of the conditions that define the current borders in our region from those expressed is not an indication of strength but of weakness”, commented further, speaking in Texas, as passed the Athenian Agency.
“The national independence of our country, it was given to us by some people, but was conquered with struggles and many sacrifices, over time the Greek people. Any conditions they came to ratify the outcome of these games. For Greece it’s a strength, its people, its history, its peaceful policy, the policy of friendship and cooperation with other countries and, above all, the policy of respect for the rules of International Law and the observance of and respect the basic principles of human rights not only for Greek citizens but for every man,” he said.