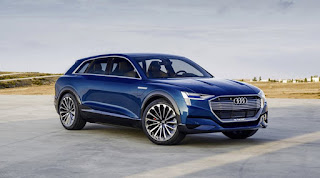 H Audi will launch in about two years the first of the… big full Î·Î»ÎµÎºÏ„ÏÎ¿ÎºÎ¯Î½Î·Ï„Î¿SUV which will be manufactured in the factory of the company, in Brussels. The German company is preparing for the launch of Q6, which is scheduled in the second half of 2018 and will be placed between the smaller Q5 and larger Q7.
Audi announced that the all-new electric model will be manufactured in Brussels, and for this reason, the premium brand of the Volkswagen group decided to transfer the production line of the A1 to the factory Seat in Martorell, Spain.
The latest information says that the Q6 output will have an advanced propulsion system with three electric motors with the batteries to provide theoretical autonomy that will touches the 500 km. Very interesting, I’ll have the time Ï„Î±Ï‡Ï…Ï†ÏŒÏÏ„Î¹ÏƒÎ·Ï‚ a and the original e-tron Quattro unveiled in Detroit lasted just 50 minutes!