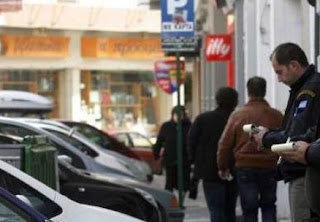 Twenty months and a tangle of objections between the participating consortia, who actually arrived up to the Council of State, had to intervene, to make the municipality of Thessaloniki to complete the procedures of the tender announced for the introduction of a new system of controlled parking in the centre and in other key areas of the city.
The public international tender is expected to be completed tomorrow with the award of the outcome of the states of the economic commission of the municipality of Thessaloniki. The new system of controlled parking, however, it is estimated that we will not enter into force before the spring of 2016, as the contractor will have a period of about three months, to develop.
Moreover, the signing of the contract with the consortium that will undertake the implementation of the project will be done after about a couple of months, due to the huge budget of the project which exceed the amount of 34,8 million. euro, will be required Ï€ÏÎ¿ÏƒÏ…Î¼Î²Î±Ï„Î¹ÎºÏŒÏ‚ control by the court of auditors.
In the center of Thessaloniki
In the first phase, the new system of parking control will apply in the area of the first municipal community which covers the centre of Thessaloniki. Even I applied on the shaft of the Queen Olga, and in the main streets of the third municipal community, and, in particular, to St. Demetrios, in Thessalonike and in the Olympics. The expansion in the areas of Toumba and Charilaou will be done in next phase.
With the development of the new system of controlled parking in the municipality of Thessaloniki aims to improve traffic conditions in the city by 20% and to substantial economic benefits, which may even exceed 1 million. euro per year.
8.041 parking spaces
With the start of application of the system of the permanent residents of each region will have the opportunity to park for free in a series of roads, which is not particularly commercial. The axes are of great commercial traffic will be able to be parked on payment of the visitors of each region for a period of time not exceeding four hours.
In the zone where the first phase will develop the new system will be available 6.054 places for residents and 1.987 for the visitors. The controlled parking in the exclusive guest posts will operate daily from 8 in the morning until 9 in the evening and on Saturdays from 9 in the morning until 4 in the after noon. The rest of the hours, i.e. from 9 at night until 8 the next morning, the positions of the visitors can be used by residents free of charge.
Charge per minute
In the municipality of Thessaloniki parking fees have been set at a height of 1,70 euro per hour. With the implementation of this system, however, the charge of the driver will be per minute and not per hour parking, as is the case today. Under the current invoice each user will be charged with 0,0283 euro per minute parking.
The permanent residents of each region will receive a special badge, which will mount in a visible location in their car, in order to have the possibility to park for totally free. While the new system will be entered in a special category with a zero charge to persons with disabilities, while we will provide discounts for specific groups of users, such as students or the elderly. On the other hand, will provide for a special tariff for those who work in the shopping center, as well as the aim of the municipality is to discourage long-term parking. Besides, it is considered that the public transport sufficiently cover the needs of workers in the centre, so I don’t have to travel to work by private cars.
Via mobile phone
The new system of controlled parking will be fully automated, as the services will be provided either through the call centre or through website or through applications on smart phones. Yes, will be multi-language.
Users will have the possibility to call for free from any cell phone a particular phone number in order to start the parking fee, just park, stating the license plate of their car. In the same manner will expire and the charge, when a driver will be ready to go. Even drivers will be able to send a message, via mobile, or to start their charge through the internet. Alternatively they will also be offered the ability to obtain card phone parking time. Each user must be registered in the system stating the particulars of his vehicle, and the method of payment chosen (e.x. credit or debit card).