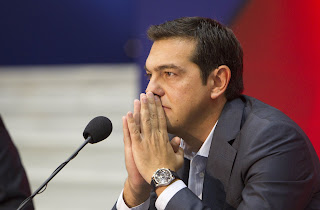 To the fore comes the movement “I’m Not Paying”, which took…
large dimensions in the previous years, mainly in the toll.
In despair lies the unemployed archaeologist George Î˜ÎµÎ¿Ï†Î¬Î½Î¿Ï…, who, believing in the movement “does Not pay” was crossed by the Egnatia motorway without paying the toll fare and now has to pay over 21,000 euro.
Since last summer he has lost any sleep when they began to arrive at the home of the first notices with fines-fire toll had not been paid for three years.
“It’s 178 violations, and the money I had to pay over the counter is 427,2 euro and they ask me 21787,2 euro. I was told the Irs that if I can’t pay you have the legal right to make seizures on deposits, or take out a property that I have in Thessaloniki”, he says.
During that period, in February 2011, the movement does Not Pay support, the current prime minister Alexis Tsipras, expressing the belief that the disobedience towards the state and government decisions, will Î¼Î±Î¶Î¹ÎºÎ¿Ï€Î¿Î¹Î·Î¸ÎµÎ¯ and will be extended, in addition to the tolls, and in other areas of social life.
Î©Ï‚Ï€ÏÏŒÎµÎ´ÏÎ¿Ï‚ of MR. of SYRIZA, then, Alexis Tsipras from the toll of the Isthmus of Corinth, participating in the day of action of the movement said: “disobedience in the face of a member, in a state that is not in a position to meet its minimum obligations, it is no longer a road, which will become a mass whether they like it or not those of us ÎºÎ±Î½Î¿Î½Î±ÏÏ‡Î¿ÏÎ½ the night of the news and regardless of what you do so the parties”.
It rejected the objections of the government for motivated mobilisations of disobedience, stressing that “the parties can neither control nor incite the spontaneous reaction of the citizens”. Indeed, he pointed out that “if the government won’t stop turning a blind eye to the interweaving that governs us all these years,then very soon this world, who resist the toll, tomorrow I will resist, and in other areas of social life. Now is the time to be an end to this speculation”.
As for the toll, mr Tsipras accused the government that it wants to address “a movement is spontaneous, that doesn’t belong to any party, as a movement of freeloaders” and discrediting, trying to give the character of self-interest. “It is not, however, self-interest, this act of resistance. It is an act of dignity, and not self-interest”.
Yes, he said that “if we get to the point to sit on the stool citizens, the reaction will be even more widespread”…
Source