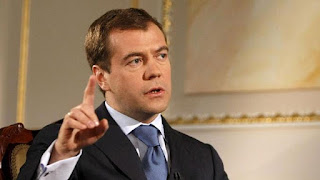 Russia will implement its own plans…
for defence expenditure despite the difficult economic conditions, said the Russian prime minister Dmitry Medvedev in an interview broadcast today by state television.
“Russia can not sacrifice the defence of the expenditure,” said Medvedev. “If we do not have reliable armed forces, we will not have a country”.
Source