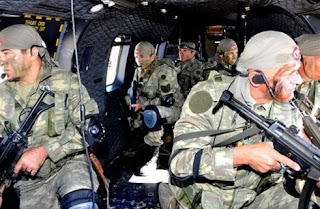 Turkey categorically refuses, in the negotiations for solving the Cyprus problem, every conversation for the removal of…
of its troops from the occupied part of Cyprus.
What are the features of this powerful, if not, what other military power “Ï„Î±Î¼Ï€Î¿Ï…ÏÏ‰Î¼Î­Î½Î·” for the last 43 years, and remains “unknown” for a lot of people?
The Turkish cypriot army
First of all he calls himself the “GÃ¼venlik Kuvvetleri KomutanlÄ±ÄŸÄ±” and it is the military forces and the security forces in the occupied by Turkey northern part of Cyprus, which is internationally recognised only by Turkey.
It is of 9,000 men who serve a term of office that reaches 15 months, and come from the Turkish cypriot population who are called for the purpose in the age between 18 and 40 years of age.
ÎšÎ‘Î¤ÎŸÎ§Î™ÎšÎ‘ TROOPS IN CYPRUS
These 9,000 men serving in units of the army, aviation and navy of the occupied
This power is enhanced permanently by about 17,000 soldiers from Turkey.
The secrecy is huge and very rarely go out to the outside elements on the structure.
ÎšÎ‘Î¤ÎŸÎ§Î™ÎšÎ‘ TROOPS IN CYPRUS
The Turkish cypriot forces, according to reports from the UN from 1984 and 2009, and posts on their website is organized into 15 battalions of two brigades of infantry, and were equipped with light arms, some light artillery and mortars.
The “navy” are the substance of the units coast guard who have 18 light patrol boats.
The Turkish occupation troops
With regard to the Turkish soldiers stationed in the occupied part of Cyprus it is worth mentioning that according to the existing information and posts from the same Turkish Authorities, the original (during and shortly after the invasion) number of 40,000 has fallen to 17.500 from the 1990s. According to the UN, however, “it is Estimated that in the last few years there are in the northern part of the island something less than 30,000 troops of the Turkey, making the area of this of the most militarised in the world, in respect of number of soldiers to the number of citizens. More recently there have been indications that the total number of Turkish forces on the island rose”.
The Turkish forces in Cyprus are units of the Turkish army of the Aegean, whose headquarters is in Izmir.
However, their commander reports directly to the General Staff in Ankara.