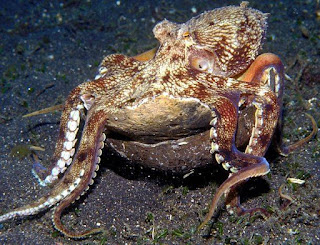 The octopus Amphioctopus Marginatus is known…
and as the â€œoctopus of the coconutâ€. Why? Because it picks up a coconut and using it as a shelter. The octopus folds his 6 tentacles around his body and walks with the other two carrying the… shield. As recorded underwater footage, the octopuses in Indonesia tend to find cut coconuts and collect so that they can use later as a shelter.
The research team argues that this is the example of the use of the tool of octopus or, more generally, of any non-vertebrate animal, in a survey in the journal Current Biology. Octopus type Amphioctopus marginatus, was filmed between 1999 and 2008 off the coasts of Northern Sulawesi and Bali in Indonesia. The strange behavior was detected in four cases. The octopus used it cut in half coconuts that have been rejected by people and have stayed in the depths of the ocean. The use of tools was once considered an exclusively human capacity, but slowly the scientists observe a similar behavior in more and more animals
Source