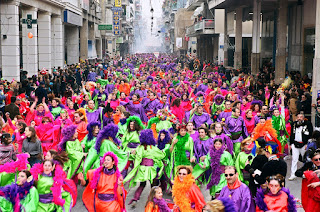 A series of comments and reactions has caused in three days the decision of the municipal authority to postpone the scheduled for tonight’s opening ceremony of the…
carnival due to the inclement weather conditions expected in the area.
Postponed for next Saturday, the opening ceremony of the Carnival – “I will fly to 23,000 euros in the rain,” says the thebest.gr o President of the Public – VIDEO
The issue of postponement, and transfer date (the last time) has caused a lot of discussions and complaints and reactions from a portion of the world, as carnival-goers and businessmen of the area of focus.
Already the president of the board of directors of the local association of shopkeepers catering and recreation George ÎšÎ¿Ï„Î¿Ï€Î¿ÏÎ»Î·Ï‚ with a statement of the stressed we shouldn’t have postponed the opening ceremony of a and a lot of people had already been informed that the carnival will start this Saturday, and accordingly had arranged in many shops â€“ bars and cafÃ©s and groups, carnival party.
Patras, greece: Furious shopkeepers to postpone the start of the Carnival
From the side of the Municipal authority of Kostas Î ÎµÎ»ÎµÏ„Î¯Î´Î·, as the chairman of the Public Company Nikos Î§ÏÏ…ÏƒÎ¿Î²Î¹Ï„ÏƒÎ¬Î½Î¿Ï‚ and the Spokesperson of the Municipal authority Andreas Antonopoulos, it would be a shame to “pop” almost 23.000 eur, as it was about the cost of the opening ceremony as expected the weather to be bad on Saturday night with showers and thunderstorms.
Î§ÏÏ…ÏƒÎ¿Î²Î¹Ï„ÏƒÎ¬Î½Î¿Ï‚ in thebest.gr: “Difficult to make this Saturday the start of the Carnival. Maybe not even the next”
At the same time the ceremony is expected even next Saturday 23/1 who will eventually become, in full. George, where they have already placed the two mezzanines, not to have fireworks of a and for security reasons is not given the permission and approval from the police and the Fire department.
With regard to the carnival and responsible group that every year is the “soul” of the event, many people have expressed on social media their intense dissatisfaction with the decision to transfer the opening ceremony one week later.
For example Dimitris Î¦Î¬ÎºÎ±Î»Î¿Ï‚ of the band 62 has arranged a party for this Saturday due to the initial announcement for the opening ceremony, said in a comment on facebook with a sense of humor and a dose of bitterness and annoyance that, “I mean, if it’s raining, and the last Sunday ending the carnival, we will have a week above carnival”.
Patras: When the rain is not … “scare” the Carnival of Patras ! SEE PHOTO
On the same wavelength, and spirit, and Nadia Konstantinidis, from the ÎºÎ±ÏÎ½Î±Î²Î±Î»Î¯ÏƒÏ„ÏÎ¹ÎµÏ‚ with a long and stable presence, which no longer participates in the BOARD of directors of the Charitable Company of the Carnival.
You’ve heard! You’ve heard! The complaint of Nadia Constantinides – member of the board.P. of Carnivals Agency for the postponement of the Start of
Yes, as stated in thebest.gr Nikos ÎšÎ±Î½ÎµÎ»Î»Î¬ÎºÎ·Ï‚, of the participants, the presence of the late 70’s in the carnival events of Patra,”the dominant celebrations and events such as the carnival can not change. It would have to be normal this Saturday.”
Nikos ÎšÎ±Î½ÎµÎ»Î»Î¬ÎºÎ·Ï‚ disagreed with the decision of the time transfer of the opening ceremony in the vote that took place at the meeting of the Public Company Wednesday 13/1. The decision is worth to remind that it was taken by a majority.
The dissenters were three of them, except mr ÎšÎ±Î½ÎµÎ»Î»Î¬ÎºÎ·, Nadia Constantinides and Aristides Stathopoulos.
Of course, to mention that there were carnival-goers who feel that due to the long duration of this year’s halloween period to 13 March, it was out of place and rushed the project for the opening ceremony this Saturday, the eve of St. john. Anthony.
Source