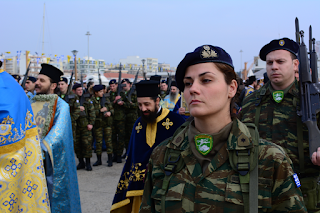 The army will have to spend…
mandatory for women to claim a position in the Police, the Fire department and the Coast guard – and optionally all the rest, in accordance with the plans of the minister of Defence Panos Kammenos, including the creation of military high schools.
“It’s time to overcome taboos and constraints of the past! Women have conquered all of the men’s â€˜castlesâ€™ and in many cases much better than men. (…) It’s time to introduce the voluntary military service of women,” said the minister to the Municipality Î’ÎµÏÏÎºÎ¹Î¿, in accordance with the report of the journalist in the newspaper “ethnos tis Kyriakis”.
“Women who wish to make a career in law enforcement will have to take the ‘baptism of fire’ from the Armed Forces as ordinary conscripts, as their male colleagues. So in the Armed Forces and other Security forces we need staff to cover combat positions. We need fighters, not bureaucrats,” the minister said, according to the newspaper.
For these projects is aware of that, and the deputy minister of Citizen Protection Nikos Î¤ÏŒÏƒÎºÎ±Ï‚.
Source