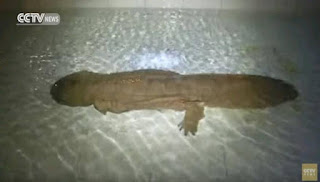 In a cave in China…
they found the fishermen a giant chinese salamander that is estimated that are over 200 years old.
The particular animal, because of the environmental disaster and the relentless hunting by humans, are an endangered species and the appearance of an extremely rare phenomenon. In particular, the population of giant ÏƒÎ±Î»Î±Î¼Î¬Î½Î´ÏÏ‰Î½ has been reduced by 80% in the last 45 years.
The average age of these amphibians it touches 80 years, so if the estimates of the scientists the age is correct, the rank is automatically in one of the oldest animals living on the planet.
Source