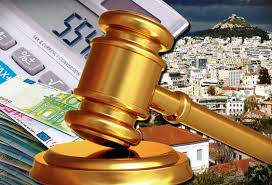 Paradoxical deviations show the red loans in relation to the areas of the country and the poorest, their number is…
lower than that of the non-performing loans in affluent areas.
Crete, the Dodecanese and Ionian Islands are among the regions of the country with the highest index of non-performing loans -near-45%- despite the fact that these are areas that in the last few years have a strong tourist stream.
The lowest percentage of non-performing loans â€“near-35%â€“ are poor or affected heavily by unemployment areas such as the Continent, the islands of the North Aegean and Western Macedonia.
In the regions with high “red” loans, according to a report in the Daily, also included the Peloponnese, Eastern Macedonia, and Thessaly.
Strong impressions created by the large delays in the repayment of loans that show tourist areas and tourism enterprises, despite the fact that the last 7ÎµÏ„Î¯Î± tourism in our country is moving encouraging.
The breakdown of bad debts by region:
Peloponnese 46%
If. Macedonia 45%
Crete 45%
Dodecanese 44%
Ionian islands 43%
Central Greece 43%
Thessaly is 42%
West. Macedonia 34%
Continent 33%
Northern Aegean 32%.
Source