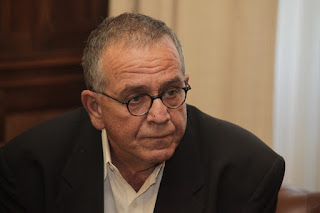 Solidarity with the struggle of refugees in the Greek…
In the abstention from taking prison food are on the evening of Saturday the refugees in the camp of the Greek protest/s for their miserable living conditions. The abstinence began during the evening mess on Saturday 4/2 in the arrivals area, and was expanded during the lunch mess Sunday and in the area of field hockey, where they reside in addition to 567 refugees.
The prison food abstention is accompanied by exclusion from the arrivals hall, so the managers of the Ministry and of Danish NGOS in DRC, which is responsible for the distribution of food. It is typical of the images that we saw all and all, with the ÎœÎ¿Ï…Î¶Î¬Î»Î± to have the accompaniment of MATT to reach space, in exactly the same way as we had seen a few days earlier Kyriakos Mitsotakis during his visit to Mytilene.
The living conditions in the Greek is, as you know, appalling and absolutely unacceptable. It is a single room, in which the refugees reside in tents, or blankets on the floor. Not observed the elementary rules of hygiene, in the area of circulating mice and insects, the food is lousy and the heating very low. There is no hot water, not provided to refugees, basic hygiene items, and even newborn infants are forced to live under these conditions, without any basic provision. There is no additional basic health care, nor access to education.
And while the reality is this, the ministry and the MEDIA have the nerve to speak again “motivated” actions, indicating yes, clearly the ANTARSYA and the ÎšÎ•Î•Î¡Î¦Î‘ (as happened in the tv show of ert). The Minister of Immigration Policy John ÎœÎ¿Ï…Î¶Î¬Î»Î±Ï‚, he reached up and support that this is a false news moving from political organizations! Confuse, of course, with malice, sympathy and solidarity with the “stimulation”, and attempt to diminish the struggle of the refugees, who have now reached the tipping point!
This is not, of course, to touch us the manipulation and the threats to them. We support until the end of the struggle of the refugees, in greece and everywhere, supporting their just demands, we are showing our solidarity in every way!
Satisfaction of the demands of refugees in the Greek and in all places and detention centres.
To close immediately the detention camps of refugees and their transport within urban tissue, in human terms and living with access to decent nutrition, education, health care and social welfare.
To remove the lousy agreement between the EU and Turkey, were given sanctuary and freedom to all.