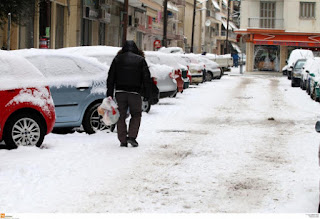 By the 1930’s, so observed data, had recorded total frost five days, as he is in the city of Thessaloniki…
which means that the upper temperature that occurred in these days was below freezing.
The total frost began last Saturday, January 7, and was maintained at 8, 9, 10 and 11 January, explains to ana – MPA, the director of the Laboratory of Meteorology and Climatology of the ARISTOTLE university of thessaloniki, professor Theodoros Karakostas. He explains that three days hard frost was recorded on 23, 24 and 25 January, 1963, however, the record of the Ï€ÎµÎ½Î¸Î®Î¼ÎµÏÎ¿Ï… total frost in Thessaloniki for the period from January 1, 1930, so started to keep a record of data.
For the next few days mr. Karakostas discloses that the Weekend weather will be good, with maximum temperatures which will exceed 10 degrees Celsius, while the minimum will be above 0. However, Monday is expected to new weather patterns, with falling of the temperature that will reach up to the level of zero.
In Thessaloniki there is a small chance for rainfall, very limited, in the afternoon hours. The winds will be blowing north and will keep low temperatures and will increase the likelihood of rainfall and even snowfall. In any case, however, the phenomena that will last two to three days, it will be much milder than those that occurred earlier, and the lower temperatures will move around the zero.