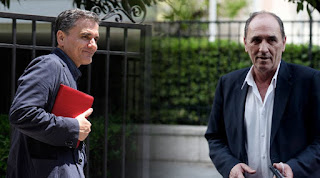 The course of today’s trading on the Hilton between lenders and the Greek government will show…
if you would do the Eurogroup of holy Thursday.
From yesterday’s five-hour trading, however, didn’t come out white smoke. As regards the preventive memorandum of the representatives of the Greek government explained to the lenders that you are not allowed the preventive legislate something that is not showed, but, to be intimidated, the lenders who asked for legislation “here and now” of measures 3.6 bn. euro.
So, today’s trading is considered to be the most critical, as the institutions will answer if they accept or not what they heard from the Greek side will accept, i.e. alternatives, and the negotiation will be led to a dead end. Reuters: Minimum chances for a deal within the week From the side of the Reuters, however, estimates that are very unlikely to be agreed this week, despite initial hopes of Alexis Tsipras to have this done before Easter, such as notes. In the event that eventually there is an agreement, it adds the publication, both in terms of the “ordinary” and “extraordinary” measures, will be a new Eurogroup at the earliest, Thursday.
Schaeuble: it is Uncertain whether it will be a Eurogroup meeting on Thursday
In the same climate and the German Finance minister, Î’ÏŒÎ»Ï†ÎºÎ±Î³Îº Schaeuble who said that, it is not clear whether there will be a meeting of the Greece and its international creditors this week. “I don’t know if we’ll meet Thursday. Still working on this”, he noted during a public discussion in Berlin What measures may include the package of 3.6 billion. Euro If you solve the problem for the legal form to be taken by the new package of 3.6 billion. euro, it remains to be agreed and what kind of measures will include.
The government and this package seeks to promote dropped that line of measures such as: the imposition of VAT of 24% instead of 13% in the accounts of the electricity and water supply the increase of the reduced VAT rate from 13% to 14% larger increases in taxes on fuel, cars etc. abolition of tax exemptions. It is considered impossible for you not to involve measures that require institutions, as a reduction of wage costs in the public sector with reductions and new reductions in pensions. New concessions of the government
Meanwhile, during yesterday’s trading for the other pack of 5,4 billion. euro it seems that there was agreement regarding red loans, with the Greek side to accept, eventually, a 1.5-year extension on sale red of the loans to the funds, instead of for three it was looking for. Information speak that Essentially it is but for a time extension, if will be sold by 1.1.2018 and not from 1.1.2017 that accept lenders â€“given system and that this could not technically be ready to set up and operate before the end of 2016 or early 2017.
With regard to the tax-exempt the Greek government seems to have declined in relation to what is mentioned in the Tax bill that was tabled in the House and to accept the bar to get at 8.900 euros plus 100 euros for each child.