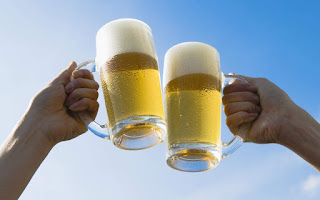 For the lovers of beer can be thrilled after the study, researchers from the Mediterranean Neurological Institute in Italy, who…
they concluded that the moderate consumption of beer daily has beneficial effects on health.
The team of researchers studied more than 150 surveys to come to the that the men who drink of 2.8 glasses of beer daily and women drink about 1.4 cups reduce by 25% the chances of heart disease.
Besides, but read even ten benefits of beer on health:
1. Beer reduces the risk for kidney stones
According to the research of Finnish scientists as the amount of water and the alcohol found in beer seems to increase the flow of urine, thus reducing the risk of formation of stones. Alcohol can also increase the excretion of calcium, which is the main component of stones in the kidneys.
2. Beer protects against heart attacks
A research team at the University of Scranton in Pennsylvania found that black beers are correlated with a reduction in the frequency of heart attacks.
3. Beer reduces the risk of strokes
Studies from both Harvard Medical School and the American Stroke Association have shown that people who drink moderate amounts of beer can reduce the risk of strokes compared with non-drinkers.
4. Beer strengthens the bones
Pan metron ariston support academics from Tufts University in Massachusetts, who found that one or two glasses of beer a day could significantly reduce the risk of cracks in the bones, while a larger quantity increases the risk of fracture.
5. The beer reduces the chances of developing diabetes
In 2011, researchers at Harvard found that middle-aged men who drink one or two glasses of beer each day seems to reduce the risk of type 2 diabetes.
6. Beer reduces the risk of Alzheimer’s
Studies since 1977 have suggested that beer drinkers are less likely to develop Alzheimer’s disease or other forms of dementia.
7. The beer cure insomnia
The beer seems to give rise to the production of dopamine, leading drinkers to feel more calm and relaxed.
8. Beer can protect eyesight
Researchers at the University of Western Ontario found that the antioxidants contained in beer, protect it from damage in the vision.
9. The beer may protect against cancer
Scientists from the university of Idaho argued that the ingredients of beer could be used in the fight against cancer and inflammatory diseases
10. The beer helps in weight loss
Researchers from the university of Oregon concluded that the substance is “xanthohumol”, produced by the hops of the beer can reduce the chances of a person to develop metabolic syndrome – a condition that leads to obesity, increased blood pressure and increased blood sugar.