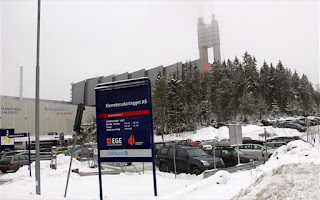 A waste incinerator with technology to capture carbon dioxide… of carbon was developed for the first time in the capital of Norway, Oslo.
The experiment in the incinerator ÎšÎ»Î­Î¼ÎµÏ„ÏƒÏÎ¿Ï…Î½Ï„ will remove carbon dioxide from the fumes generated from the combustion of industrial and household waste. If successful, the technology can contribute significantly to the reduction of emissions of greenhouse gases, when developed on a larger scale.
“I hope the Oslo show in other cities that the technology is feasible,” said the mayor of Oslo, Marianne Borgen, inaugurating the installation.
So far, the technology of carbon capture and storage has been tested at some stations, combustion of fossil fuels, but the high cost had put insurmountable obstacles.
The incinerator, which generates heat for heating of buildings in the city, producing 300,000 tonnes of carbon dioxide per year, accounting for about 0.6 percent of anthropogenic emissions of Norway.
The experimental system consists of five containers with a series of pipes and filters and binds carbon dioxide at a rate of about 2,000 tonnes a year.
The experiment will last until the end of April. If the results are positive, a system full-scale will be constructed by 2020. The carbon dioxide could then be sent to the North Sea and is used for the enhanced recovery of oil and natural gas.
The technology is not yet cost-effective, however, the incinerator is burning a large part of organic waste from food and wood, so it actually removes carbon dioxide from the natural cycle and not only the industrial production.
“The achievement of the targets set in the Paris agreement will not be feasible without the extensive use of negative emissions,” said Frederic Hauge, head of environmental group Bellona.