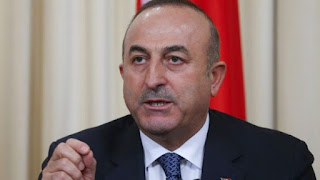 “A spoiled child” featuring the minister of Foreign affairs of Turkey Mevlut Î¤ÏƒÎ±Î²Î¿ÏÏƒÎ»Î¿Î³Î»Î¿Ï… the Panos kammenos…
a few hours after the tough response of the Greek MFA in yesterday’s statements, but also the placement of the Greek minister of Defence.
“They know what can make the Turkish army”, stresses according to Anadolu, the Turkish FOREIGN minister, hardening his attitude in Greece, and calls on the Greek government to put under control, mr. Burnt. “If you don’t test our patience,” he says.
As broadcast SUNDAY, citing the agency Anadolu, in response to a question from a journalist in Antalya. Cavusoglu said: “We attach importance to our relations with Greece. In different themes, for the theme of islands in the Aegean sea, the continental shelf, FIR, etc., thinking differently (we have different positions). But for these we have mechanisms, exploratory contacts. We do this to not escalate the tension. But this partner of the coalition government (Panos Kammenos), is constantly making steps that test our understanding. Causes. They say to us “deep down he’s a good kid, don’t pay attention (let’s overlook that)”. Yes, but until where will she go? Took him forcibly to the government (coalition), and we can lose sight of it? And my patience has limits. It’s not inexhaustible. We show maturity, but that’s Why…that’s because some political things are between us I don’t want to say it. Actually, we know that the current government is annoyed by this bratty child who is a minister…What would it be? Will we tolerate spoiled it? It’s our job to employ them? Greece with Turkey’s two neighbors. That doesn’t change. There are also problems. We have the will to solve them. In the history we’ve had wars, But in the last few years we have an approach between our peoples. Our people go to Greece, the Greek islands and the Greeks are coming to Turkey. When we observe, we have a lot in common, but we must not allow a brat to upstage them all. We don’t get into a race with that kind of logic. No need to make a show of force. What he can do in the Turkish army when they need it, they know it better those. The government. To tell (explain to) and that little brat (child) and don’t test our patience”, said the Cavusoglu, according to the correspondent of the Agency in Istanbul Andreas Î¡Î¿Î¼Ï€ÏŒÏ€Î¿Ï…Î»Î¿.
The Panos Kammenos said today, speaking to SKAI, “let’s run over the Turks, the foot on a Greek island, to see how it will go, then”, mr. Cavusoglu to the blames that “prevents the improvement of Greek-Turkish relations”.
Glowing in Cavusoglu: Let’s set foot to Them, to see how you go
“There’s no way to set foot on a Greek island. Will be addressed. Let’s run over, but then to see if it will go from there,” he said on SKAI tv on the morning of Sunday, Panos Kammenos.
“The Armed Forces are ready to face any challenge,” clarified mr. Kammenos speaking on SKAI, stressing that “every plane violating the national airspace, any ship that violates the national territorial waters are treated”.
In fact, addressing the Turkish minister of Foreign affairs, the minister of Defence said: “Any challenge occurs. To know mr Cavusoglu that now the prime minister is not the Simitis and FOREIGN minister Pangalos who joined and in the SOUTHWEST. Now is prime minister Tsipras, ministry of FOREIGN affairs, the Kotzias and minister of Defense, too. Now the flags don’t take the airs”.
Warm episode Kotzia â€“ Cavusoglu for the Imia
Hard answer were the ministry of Foreign affairs in the challenging statement of the Turkish Foreign minister, Mevlut Cavusoglu, who said that “if we wanted to go up to Them we would do it”.
“When someone is unable to respond politically to events, probably, not to understand. You may not understand the technical, legal and political sides of issues, and for that selects the personal attacks. Attacks that do not promote the relations between the two countries and are foreign to our political culture. Each and every one, and the measure of,” was the reply of the ministry of Foreign affairs.
Mr Cavusoglu was reported on a range of issues, such as the Imia and Cyprus, which are touched on in a recent interview on SKAI tv the Greek Foreign minister, Nikos Kotzias. “If the duty of the Turkish leader was to rise to the Imia would have done it. Don’t forget that we foot where needed”, said yesterday the Cavusoglu.
With regard to the 8 Turkish soldiers, the adoption of which the Council of State, he said, “no,” mr. Î¤ÏƒÎ±ÏƒÎ¿ÏÎ²Î¿Î³Î»Î¿Ï… said: “Greece prevents the prosecution of the traitors for their crimes. That doesn’t mean good neighbourliness and friendly relations”. Recall that the Anchor has asked ÎµÏ€Î±Î½Î±Î»ÎµÎ¹Î¼Î¼Î­Î½Î± the version of 8, promising that they will have a fair trial
“That doesn’t surprise us” he continued by commenting that the head of the Turkish PKK “had found refuge in Greece”.