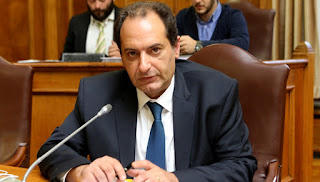 Ladies and gentlemen of the SOUTHWEST, change title to mr. Vroutsi. It is a shame to be called head of the sector of Labour, Social Security and Social Solidarity, refers to the…
answer the minister of Infrastructure and Transport Ch. Î£Ï€Î¯ÏÏ„Î¶Î· following statements by mr. Vroutsi for a morning tv interview the minister.
“We understand your concern, forget about all the proceedings. We remind you, however, THE WORKS and of the minister, mr. Vroutsi:
-increased the insurance contributions at a rate of 100% in all, the haves and have not, businessmen and unemployed
– repealed the proportionate contributions and to apply the system of absolute return. Policy of absolute injustice, when unemployed and businessmen were forced to the same contributions
– forbade even the hospital care of people with severe diseases and of their children, due to insurance liabilities
– trashed the insurance system, by participating in the PSI and in the great theft, and weakening of the insurance funds
– repealed the collective bargaining agreements
– As a proud emperor meet, and I don’t Î´Î¹Î±Î²Î¿Ï…Î»ÎµÏ…ÏŒÏ„Î±Î½ with any Carrier for the rich, disastrous and callous work
All that has changed and continues to change the government of SYRIZA – ANEL.
Please continue to our ÎµÎ³ÎºÎ±Î»ÎµÎ¯Ï„Îµ and to blame us for their disastrous policies, their decades-long looting of the pension funds of the strains, and the tearing down of the country and of the social state.
Please continue to blame us for the fight we along with the Greek people, to reestablish the social state, the rule of law, collective agreements and a european work-related context.
The people haven’t forgotten…
“You go into the black pages of the history of the country…” says in his reply mr Spirtzis.
The head of the sector of Labour, Social Security and Social Solidarity of the New Republic, a member of the Cyclades, John Yesterday, said earlier that “mr Spirtzis, with bottomless audacity, today, promised from the tv even and 14th pension.
The greatness of the Î±Ï…Ï„Î¿ÎµÎ¾ÎµÏ…Ï„ÎµÎ»Î¹ÏƒÎ¼Î¿Ï.
This is the same man who, as president of the T.E.E., called on engineers not to pay their contributions, while now imposed on them by three times, the requires.
It’s the government that has brought crippling contributions to the self-employed, cut-off main and supplementary pensions, dividends, NCAA of Ï‡Î±Î¼Î·Î»Î¿ÏƒÏ…Î½Ï„Î±Î¾Î¹Î¿ÏÏ‡Ï‰Î½, as well as 25% of the main pension to the new pensioners.
Is he prepared to vote with SYRIZA and other taxes and reductions in pensions to keep in power.
You should be ashamed of themselves, and not to play with the intelligence and suspense of the citizens”.