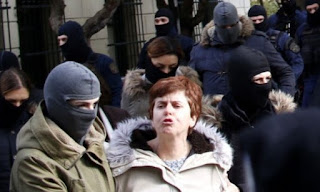 An unknown “ride”…
of Paula Roupa with a taxi from Thebes to desert point of the Mountain was the one that assisted the investigation of the EL.NES. and led to the arrest at dawn of Thursday, in Heliopolis.
Happened in the afternoon of 21 February 2016 after the failed endeavour to escape of Nikos Maziotis in a helicopter.
According to to vima on this ride he met an anarchist who got in the crosshairs.
The cops have dozens of scans of calls generated critical information for the return from Boeotia to Athens.
Then the Boy with a fake id, he proceeded to rent a helicopter and during the flight he tried to force the pilot to change course under the threat of a weapon, and then shots were fired.
In particular, the helicopter took off from Porto Î§ÎµÎ»Î¯Î¿ Argolida and in the intermediate station, the village of Theologos, Fthiotida, on the helicopter, boarded the Roupa. When the ship arrived in Attica, the Boy pulled out the gun that she had with her and asked the pilot to change course.
When the pilot attempted to disarm the woman, she resisted and was followed by a scuffle, with the result that the helicopter lost height. Fortunately, the conflict was avoided and the helicopter landed in non-populated mountainous area, between the villages of Plataea and Red. The Boy managed to escape, leaving behind a clip.
In the wake of the company’s helicopter starring Pola Roupa and target the release of the partner of Nikos Maziotis from the Lark of the ministry of Justice has ordered the carrying out of emergency disciplinary research on the occasion of preparatory steps that seem to have been made to facilitate the escape.
As announced in a research done by correctional officers in place of the F wing of the Lark “were found cut, and thoroughly covered two vertical bars ÎºÎ¬Î³ÎºÎµÎ»Î¿Ï…”.
According to information, the bars that were identified in the shared space that has access to the Romanos, next to a dead courtyard which is not covered by barbed wire and guarded by armed men. It is characteristic that the information report that the investigation revealed that they had tried to put the bars in place and stick it with chewing gum or plasticine.